Earlier this summer, we had the chance to test out some of the more innovative food delivery options around Seattle. With a few taps on our smartphone, startups like Caviar and Munchery delivered us everything from chicken to crab cakes.

But we took it to another level on Tuesday afternoon and entered a whole new world of on-demand food ordering with Taco Bell’s new mobile app. 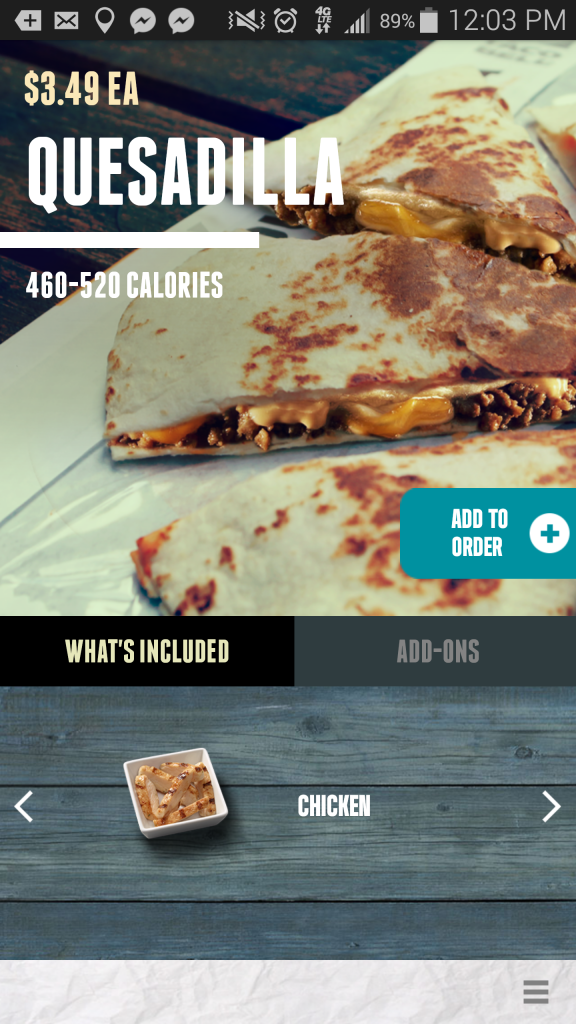 Naturally, we wanted to give this a try. After downloading the app this morning, I immediately noticed the nice aesthetics of the software, which featured huge photos of Taco Bell products. It was also easy to customize each order, whether you wanted extra tomatoes in your taco or more lovely Taco Bell guacamole in that Gordita. There was also an app-only deal for a $1 Baja Blast drink, which was a nice touch.

We went through the app and picked out a nice array of items: A quesadilla with extra onions; a burrito supreme with beef and chicken; among others.

Here’s how the ordering process worked: 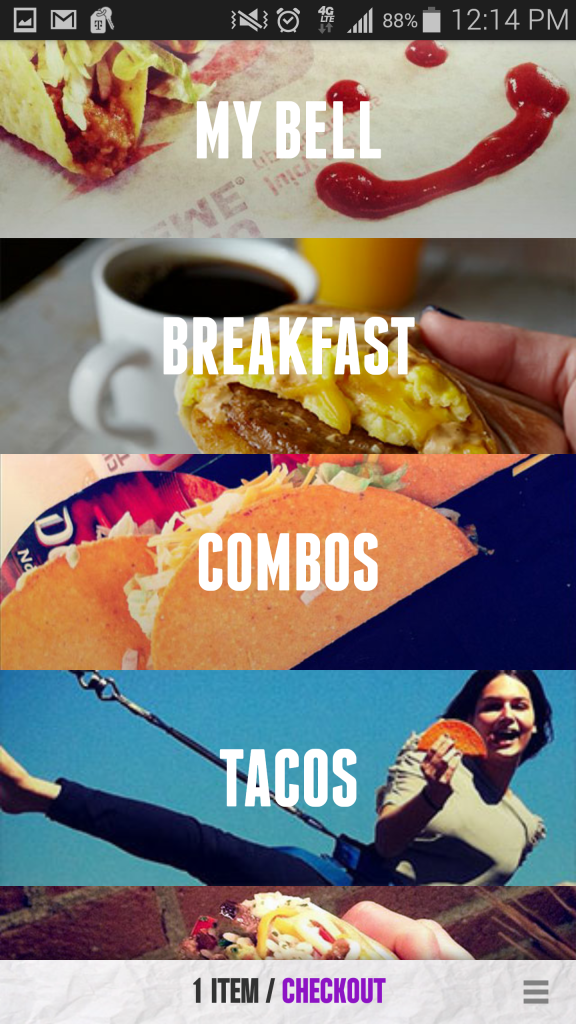 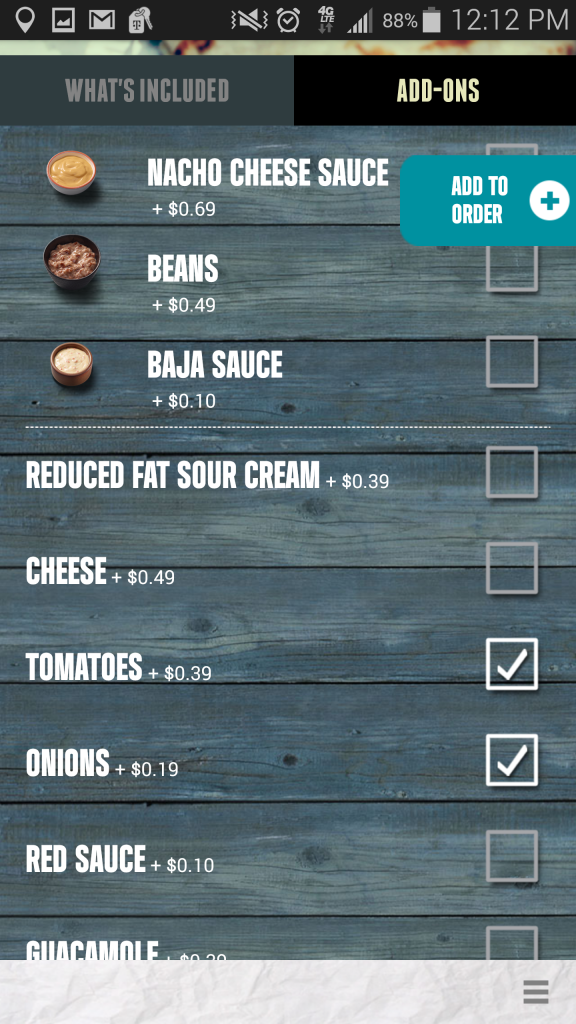 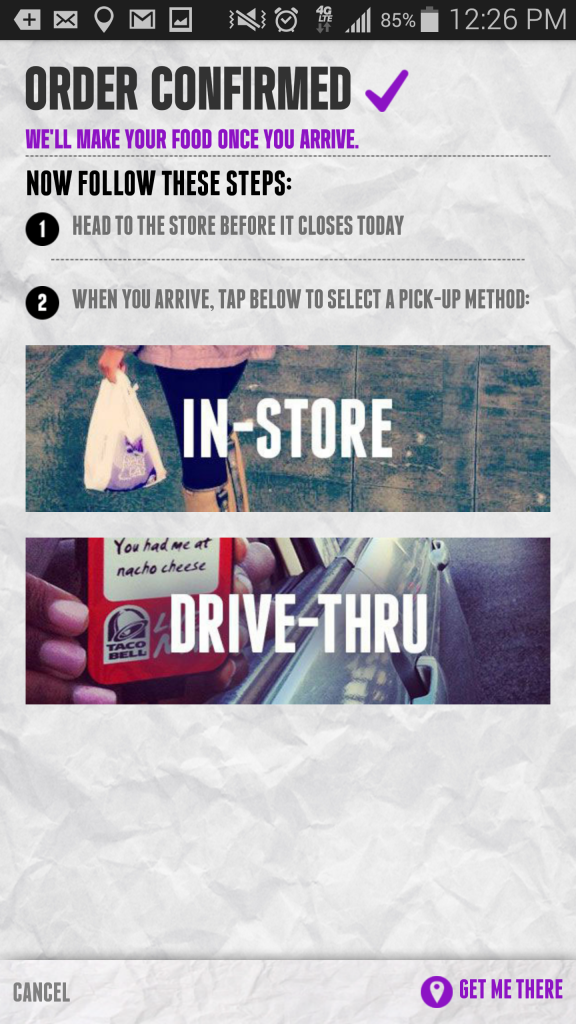 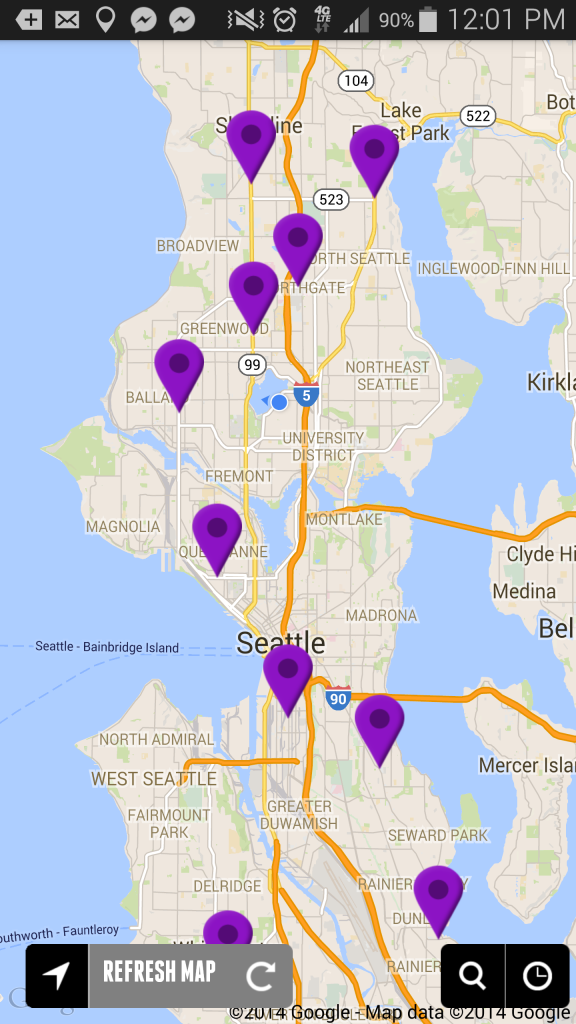 We entered our credit card information to pay — you can also use a Taco Bell gift card — and the app gave us an order number to provide once we arrived at the restaurant.

We made the short drive to our favorite Mexican eatery and once we pulled into the parking lot, the app pushed a notification to my phone — it knew I had arrived. From there, I had two button options: “In-Store,” or “Drive-Thru.” Time was of the essence, so we scooted over to the drive-thru window.

That’s when our Taco Bell mobile ordering dreams were dashed. Taped on the drive-thru speaker was a sign notifying us that this particular Taco Bell was closed until further notice.

“This is a joke, right?” said my colleague Todd.

I went back through the app, and because I had not created a profile, there was no way to find my order. I also did not know if I had been charged or not.

Frustrated, hungry, and disappointed, we decided to see what was going on inside the Taco Bell since there were a few people inside. Turns out the joint was closed because of a freezer problem that happened over night. Unbelievable.

We told the employees inside that we had already paid with the new mobile app and didn’t know what to do. The manager was actually quite accommodating and snagged what looked like a mobile app instructional packet to help us refund the order. She also told us we could come back and enjoy our entire meal for free, while showering us with a couple $5 Taco Bell gift cards.

We ended up buying a couple burritos at the small taco truck down the street. Sure, it was probably more authentic, but I had mentally prepared to eat Taco Bell and felt a little empty-handed.

At the end of the day, it was disappointing that our inaugural Taco Bell mobile ordering experience failed at the last second. But aside from the freezer issue, everything else was on-point — the app was seamless and easy to use; it was nice to pay with our phone and pick up at the restaurant; and the Taco Bell employees offered up great customer service once we told them about our problem.

I just entered that $5 gift card into the Taco Bell app. Here’s hoping our next mobile ordering try comes without any freezer malfunctions.