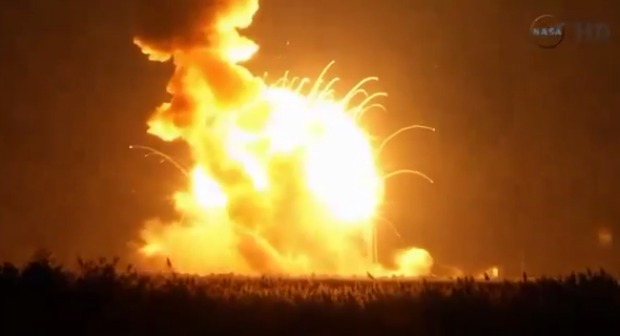 An Orbital Sciences Antares rocket lifting off from Wallops, Va., to resupply the International Space Station exploded on liftoff a short time ago.

The payload included the Arkyd 3, the first test satellite from Planetary Resources, the asteroid mining company based on Redmond, Wash.

Initial reports indicate that no one was hurt in the incident, which is being described as a “catastrophic anomaly.”

Here’s a video of the incident, captured from the NASA TV live stream, which is ongoing here.

There has been a vehicle anomaly. We will update as soon as we are able.

The company has focused on relatively low-cost approach to its satellites, so the loss of this particular satellite is not likely to be devastating for its business, although it could affect its timeline. Planetary Resources, started by X-Prize founder Peter Diamandis and Space Adventures chairman Eric Anderson, is backed by a wide range of investors, including Google CEO Larry Page and filmmaker James Cameron.

On board the Arkyd 3 were Planetary Resources’ initial designs for a computer system, a power system, a communications system, an attitude determination system (determining the direction the satellite is pointing relative to the stars) and many other technologies that Planetary Resources plans to continue working on as it develops future versions of spacecraft in the Arkyd line.

Planetary Resources coordinated the launch of the Arkyd 3 through Spaceflight Services of Tukwila, Wash., and Houston-based NanoRacks. The Arkyd 3 is about 12 inches long and 4 inches wide, weighing about 10 pounds.

Future versions of the Arkyd line will have telescopes for hunting for near-Earth asteroids. Ultimately, in a few years, the plan is to send Arkyd spacecraft to mine asteroids, where the company envisions a trillion-dollar market capturing oxygen and hydrogen for fuel, and mining for precious metals.

Update: This was not the “Space Telescope For Everyone” that Planetary Resources funded through a Kickstarter campaign that raised more than $1.5 million last year. The Arkyd 3 was a preliminary, test satellite designed to serve as a precursor to future Arkyd missions.

Update No. 2: Orbital Sciences released a statement regarding the rocket failure:

Orbital Sciences Corporation confirms that today’s Antares rocket launch from NASA’s Wallops Flight Facility was not successful. Shortly after lift-off from the Mid-Atlantic Regional Spaceport Pad 0A at 6:22 p.m. (EDT), the vehicle suffered a catastrophic failure. According to NASA’s emergency operations officials, there were no casualties and property damage was limited to the south end of Wallops Island. Orbital has formed an anomaly investigation board, which will work in close coordination with all appropriate government agencies, to determine the cause of today’s mishap.

“It is far too early to know the details of what happened,” said Mr. Frank Culbertson, Orbital’s Executive Vice President and General Manager of its Advanced Programs Group. “As we begin to gather information, our primary concern lies with the ongoing safety and security of those involved in our response and recovery operations. We will conduct a thorough investigation immediately to determine the cause of this failure and what steps can be taken to avoid a repeat of this incident. As soon as we understand the cause we will begin the necessary work to return to flight to support our customers and the nation’s space program.”

Orbital will provide more information as it becomes available and is verified.

Follow-up: Planetary Resources vows to press ahead after rocket explosion