The last time I wrote about the temptation to use my phone while I drive, one solution I considered was to banish my phone to the trunk.

Today, that’s not going to happen.

My phone spends every ride in the front seat, thanks to real-time traffic navigation apps that save me and millions of others minutes per trip — the subject of last week’s column.

If safety advocates were hoping the dashboard could return to a device-free zone, I think we can declare their hopes, well, dashed.

Whether they’re there as little rectangles or integrated into new cars’ computerized innards, our devices called shotgun.

And it might be the conversation about safety that’s been thrown in the trunk.

The longer I drive in this smartphone ruled world, the more I notice new blind spots in our understanding of device-distracted driving.

Take the mixed messages in the app I told you I use daily to navigate real-time traffic: Waze.

“Let’s get started. Drive safely,” the voice navigator reminds me at the start of my route.

Then the prompts begin.

These are small billboards that pop up over your live map to tell or even ask you something. Some prompts list which of your friends are driving. Some are ads you can close or save for later. Others ask you to confirm or deny other drivers’ reports of road hazards, red light cameras and the like, with one or several taps.

You are also at any time allowed to report road hazards through the app — Waze’s special sauce. Tap the report button, tap what kind of hazard it is, tap where it is on the road and any relevant details, like whether it’s major and minor if it’s an accident. 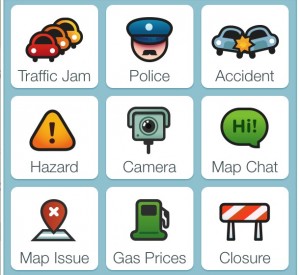 Oh, and the app’s social layer means you can see and tap on icons representing other Waze users on the map. While you’re driving.

I’ve avoided all this behind-the-wheel interaction. It’s felt pretty risky. But the app lets you do it. What’s more, it thinks it’s perfectly fine.

I knew that for sure when I saw what happens when you try to type in a new route on the move. The app freezes, displays a safety warning and unlocks the ability only if you say you’re a passenger.

Tapping is good but typing is bad, Waze seems to say. But come on. Are they really that different?

And why lock up route typing while on the move but not, say, freeze when it’s clear the devices are being held in drivers’ hands, rather than propped somewhere stable?

Is anyone even asking?

Waze doesn’t have to resolve these inconsistencies because no one is demanding it does. That makes business sense: Its priority is to save you time driving, which in a place like Seattle is getting more and more necessary as traffic gets worse and worse.

This leaves us with a problem. No one knows where to draw these finer lines between acceptable and unacceptable device distraction.

For years now, I’ve marveled at how safety advocates have clung to the term “texting and driving.” As if apps don’t exist.

Worse, we’re not really talking about it.

We don’t even know what to call it.

For years now, I’ve marveled at how safety advocates have clung to the term “texting and driving.” As if apps don’t exist. As if they haven’t dominated smartphone real estate with complex levels of interaction and tremendous, narrow utility that goes way beyond typing messages to one person.

That means apps and phone features that aren’t about typing to or calling someone are all but left out of the discussion, and app users and developers are free to shrug it off and drive.

The language is changing. A 2013 study from the AAA Foundation for Traffic Safety calls it “distracted driving,” a term that’s catching on.

And that study spends some time challenging people’s perception that “hands-free” technology use is totally fine. That’s an assumption car companies are normalizing with every new touchscreen menu they add to their screens, despite studies that show that even voice-activated, tap-free dashboard systems distract.

For better or worse, technology’s home in the passenger seat is stuffing our inbox with questions we’re not addressing.

Whether we love tech too much to ask them may be the biggest and toughest of all.