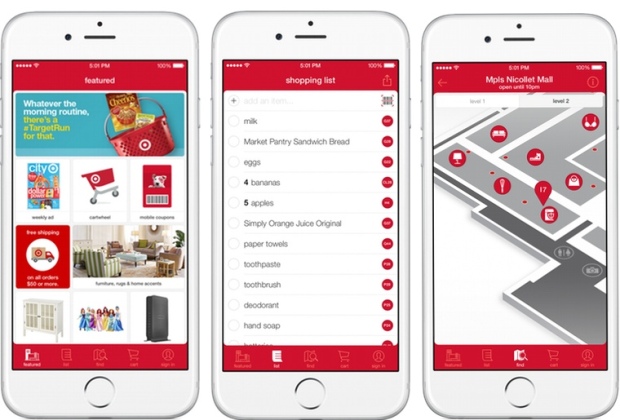 Target has already taken some pretty extreme measures to beat Amazon this holiday.

Last month, it started offering free shipping on all online purchases and here comes another big move: The Minneapolis-based retailer is rolling out new mobile features that makes finding something in the store as easy as searching for products online.

Just in time for Christmas, Target is updating its iPhone app to include interactive maps and shopping lists that will help shoppers remember what they were looking for and where to find it.

The maps will be around indefinitely, but for the holidays, it will be providing special versions to help bargain hunters find the best deals on Black Friday.

“We view mobile as the new front door to Target,” said Jason Goldberger, SVP of Target.com and Mobile, in a statement. “We’re launching a host of significant enhancements and updates to Target’s mobile offerings – making it easier than ever for guests to shop Target.”

The map and shopping list technology was built by Bellevue, Wash.-based Point Inside, which has been working on ways to guide shoppers through stores and malls for nearly six years. The roll-out marks the company’s third major implementation, following the Lowe’s home improvement stores and Meijer, a grocery store chain located in the Midwest.

With this announcement, Point Inside’s platform will now be tapped nearly 3 billion times on more than 100 million devices by the end of this year. The software update for Target’s main iPhone app should be available immediately with instant access to maps for all 1,801 U.S. stores.

Point Inside CEO Josh Marti said after Target ran a pilot all summer at 44 stores, it discovered shoppers were using their phones to ask lots of typical retail questions, like “do you have it?” and “where can I find it?” Other roll-outs have proven that around 70 percent of shoppers trying to do in-store-related activities on their phones, he said.

Target’s app includes several new features, including the ability to pinpoint the location of items on a store map and the integration of new shopping list technology that provides auto-complete when typing. The shopping list also provides aisle locations for items, regardless of whether a person has entered a generic term like “bread” or a very specific item, like “Oreo Cookies.”

For Black Friday, users also will be able to open the app to find the location of Black Friday offers, which may be particularly useful when trying to get in and out of the store as quickly as possible. The deal maps will not be available until the week of Nov. 28.

The updates may seem minor, but trying to get customers to buy more when already in the store is a unique challenge presented to physical retailers. Likewise, it’s a problem that Amazon has not had to solve, even though it gets credit for doing a lot of the cool stuff in retail over the past decade.

“The bigger opportunity is to get those people in the store to buy more,” Marti said. “It’s just the start of a wave of retailers that are realizing that in-store is much larger than the online side. We’ve been pushing it four of six years, but it has taken until the last couple of years to get adoption.”

The software update could be a popular one with lots of consumers opting to update for access to Apple Pay, which Target has enabled for online purchases.

Next up for in-store innovations could be something Marti calls the “Blue Dot,” which allows customers to track their exact location on the map to easily find items on the map. Maybe next year Point Inside’s customers will be ready for that, he says.