Tableau CEO Christian Chabot took the stage today for its annual customer conference, telling the more than 5,000 data nerds at the Washington State Convention Center that they are the “most creative problem solvers of the modern era.”

Tableau has certainly capitalized on the boom in “big data,” going public last year in a spectacular initial public offering that has now valued the software company at $4.8 billion and recently taking over an old gym in Seattle’s Fremont neighborhood to accommodate its fast-growing engineering staff. It didn’t always start that way.

When Tableau hosted its first customer conference at Seattle’s Edgewater Hotel seven years ago, 180 people showed up. Now, thousands of people use the company’s data visualization tools to plot and portray data, everything from earthquake frequency in Greece to Big Foot sightings in the Pacific Northwest to airline flight delays on the East Coast.

At today’s conference, Chabot noted how most technologies are designed to eliminate “drudgery” — whether sorting email, fraud detection or even self-driving cars that have the steering wheel removed.

Chabot said the next big wave in computing will not be about automating “the routine,” but “unleashing the tremendous creative potential of our minds.” That wave is ushering in new tools, which make it easier for creative professionals do their jobs. 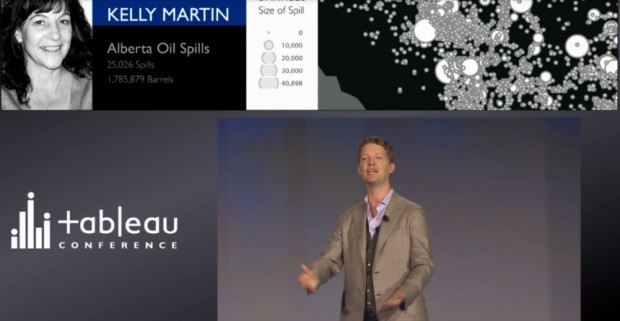 “Analysts and artists are both on a mission to reveal something new — to discover truth, to find meaning,” he said. “Artists challenge us to look at the world differently, and so do you.” In his remarks, Chabot cited everyone from architect Frank Gehry to painter Andrew Wyeth to the Wright brothers.

With that in mind, Chabot noted that Tableau is seeking to emulate four key things that creative tools do, one of the most important being the idea of “fast experimentation with data.” The second key attribute is speed, since Chabot said that artists need “immediate feedback” in order to keep focus on their ideas. The final two items Chabot cited were “expressiveness” and “control.”

“Brilliant artists, don’t use paint-by-number worksheets,” he said. “They don’t confine themselves to the prison of prior expression. They start with a blank canvas or a block of wood.” In the past, Chabot noted how software has constrained people by forcing them to work inside templates or dialogue boxes, “restraining our thoughts to a narrow pre-approve way of thinking.”

As to providing data users with control, Chabot noted that “Jackson Pollock didn’t walk around telling other people to splatter it like this, or splatter it like that. Da Vinci did not do his best work by filling out a painting request form.”

Comparing business intelligence software to the work of creative artists may seem like a stretch, but Chabot noted that it has been done before, citing the early work of Adobe (which interestingly has a large campus located next to Tableau’s headquarters in Fremont). Adobe’s PostScript allowed people to mix graphics and fonts on a single page, removing the need for typesetting.

“PostScript was a breakthrough. It gave birth to desktop publishing, and has unleashed generations of creative thought,” he said.

In his concluding remarks, Chabot noted that customers are choosing the path of creativity over old-school enterprise software systems. Using those old tools, Chabot said people don’t feel inspired or in control, comparing it to the process of sending off film canisters to the lab for development.

The idea behind Tableau, he said, is to encourage “creative problem solving” that encourages people to ask new questions and “unlock the creative ingenuity of its people.”