T-Mobile CEO John Legere talks a big game, but he has the numbers to back it up.

Now that all of the major wireless carriers’ results are in for the third quarter, let’s look at the scorecard to see how Verizon, AT&T, Sprint and T-Mobile stack up. 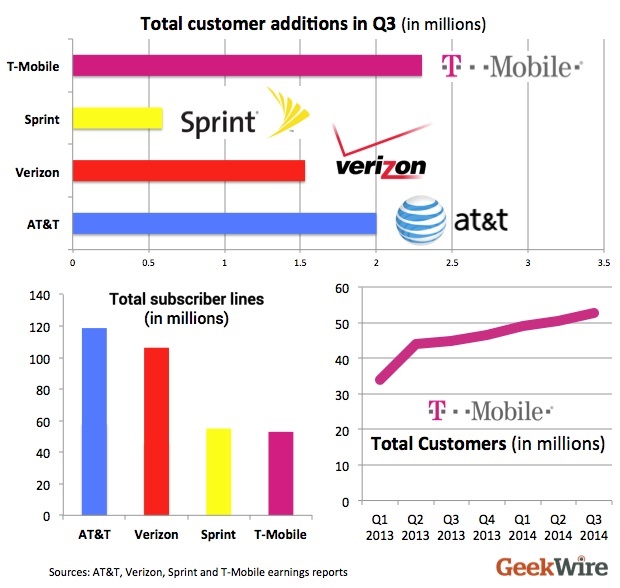 T-Mobile may be the smallest of the four major U.S. carriers, but when it comes to subscriber growth, it stands out.

In other words, as the fourth-largest carrier in the U.S., T-Mobile is punching above its weight. Analysts look at postpaid growth as a key way to determine a carrier’s health. These customers, who pay at the end of a billing period, typically have better credit than their prepaid peers and are considered more valuable.

When taking into consideration all subscribers added during the quarter, including prepaid users and tablet owners, T-Mobile also led the pack, adding 2.3 million. AT&T trailed behind only slightly, adding 2 million, followed by Verizon Wireless with 1.53 million and Sprint with 590,000.

A battle for customers

Carriers today are under tremendous pressure to add customers (and especially not lose them). To do so, they are all offering increasingly better wireless plans that are richer in data and cheaper in price.

T-Mobile’s growth ultimately boils down to offering more for less.

For more than a year, it has been offering a constant drumbeat of price cuts or other incentives through its “Un-carrier” marketing initiatives. Through that program, it’s introduced the ability to upgrade devices twice a year; eliminated roaming fees; and started offering to pay customers’ early-termination fees, among other benefits.

In August, Sprint decided to give up on acquiring T-Mobile, and replaced its CEO Dan Hesse with Marcelo Claure, who is racing to turn the ship around. Under his leadership, Sprint, which is majority owned by SoftBank, has jumped on the same bandwagon as T-Mobile, slashing prices and pledging to upgrade its network to offer faster speeds in some cities.

Sprint’s results, released on Monday, were worse than analysts had predicted, sending shares crashing by 16.5 percent.

Verizon Wireless has been the most reluctant to enter the pricing war, arguing that its superior service demands a higher price. That approach may explain why it had just 457,000 postpaid phone net additions during the period — compared with 1.2 million for T-Mobile and 466,000 for AT&T.

Last month, a research firm suggested that Sprint added more subscribers than T-Mobile in the third quarter. We now know that was not the case, but there are some signs that Sprint’s tactics are starting to work, especially at the tail-end of the quarter. For example, Sprint said postpaid phone additions grew month-over-month by 37 percent in September. Additionally, it’s postpaid phone losses slowed by nearly 60 percent in the final month of the period.

Later, in a call with analysts, Sprint’s CFO Joe Euteneuer said the priority is to get back to postpaid customer growth. “Given the trends we are seeing in the market today, we are optimistic we will be able to deliver positive postpaid net additions in Q4,” he said, according to a transcript of the call.

Legere, T-Mobile’s gregarious leader, has been outspoken about his goal to overtake Sprint as the third-largest carrier in the U.S. by the end of the year. He still has a ways to go. At the end of the third quarter, T-Mobile had 52.9 million and Sprint had 55 million subscribers (incidentally, that’s nearly half the size of both Verizon and AT&T).

Legere dismissed any progress Sprint was making in T-Mobile’s conference call. “Let’s not get too carried away with somebody that went from dead to showing a pulse,” he said. “They’ve got a lot of work to do.”

But in some respects, Sprint and T-Mobile are in similar situations.

They both are in the middle of repairing their images, and to do so, are offering customers inexpensive plans as incentive to switch to a network that is still in the process of being upgraded to the faster speeds. T-Mobile is just ahead of the game, having started earlier.

But after the third quarter, it’s hard to argue that T-Mobile doesn’t have momentum on its side. It has now added 10 million total customers over the past six quarters. Last week, it bumped up full-year expectations, saying that it now expects postpaid net additions to total 4.3 to 4.7 million, implying fourth-quarter additions of 700,000 to 1.1 million.

“it’s a conservative estimate for us,” Legere said. “We’re pleased with the momentum that carried into October.”