Faisal Masud played a role in some of the most innovative e-commerce companies on the planet — from drugstore.com and Amazon to eBay and Groupon.

Now, he’s landed at another: Staples.

What, you think of Staples as the 28-year-old brick-and-mortar retailer of printer cartridges and office chairs? 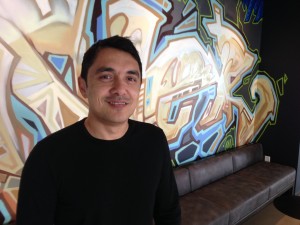 Not under Masud’s watch, who has helped usher in a new era at the Framingham, Massachusetts-based company. Since his arrival as executive vice president of global e-commerce last year, Staples’ online sales have grown to nearly 50 percent of revenue. Items for sale through Staples.com have mushroomed to about one million, up from 500,000 at the end of 2013.

And now the company is doubling down on those online efforts, opening a new 15,000 square-foot engineering and development center in downtown Seattle. The hip office, on the cusp of Pioneer Square at 719 Second Avenue, is adorned with graffiti art, a ping pong table and, of course, urban cool office furniture direct from Staples.

The office already houses 40 people, with room to nearly double in size.

Masud, who was recruited to Amazon in 2002, said Seattle is a natural place for the company’s expansion.

“It is pretty clear to us that the supply of folks in Framingham, Massachusetts is a little bit lower than what we can do in Seattle, Washington,” said Masud. “The talent pool is very strong here.”

It didn’t hurt that Masud’s connections in Seattle run deep, having spent seven years at Amazon.com before moving on to serve as head of global shipping and fulfillment in eBay’s Bellevue office, and later running Groupon Goods from Seattle.

“Having a pretty big network myself in the area is what triggered our desire to scope out Seattle,” said Masud, who now splits time between Seattle and Framingham.

Some of the company’s new hires include former eBay manager Ryan Bartley, who heads up Staples’ mobile efforts, and former Nike.com engineering director Lance Brimble, who leads the new Seattle office. Staples also has been mining talent at Amazon, though Masud said that’s not the only target or the reason it established a presence in Seattle.

Engineers in the new office oversee the search functionality on Staples.com, in addition to handling components of the company’s growing mobile efforts. But Masud sees projects in the Seattle office growing over time, including everything from personalization to data science.

It marks the second innovation lab for Staples on the West Coast, joining an existing facility in Silicon Valley. Last year, Staples purchased San Mateo, Calif.-based Runa, giving the company an operation in the Valley. 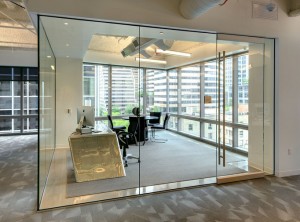 Of course, Seattle is known as a hotbed for e-commerce. But that also makes it increasingly challenging to hire top talent, given that companies such as Nordstrom, Costco, Amazon and Zulily also are on the prowl for top engineers.

Nonetheless, Masud thinks Staples —which reported a five percent drop in revenue last year to $23.1 billion — has a good story to tell. Staples has scale, and it is diverse.

“We have a lot of scale that others in the arena don’t,” he says. “And I think our business is quite diverse.”

But the big differentiator at Staples is that the company focuses on business customers, whereas most of the other big retailers in Seattle are consumer focused. In fact, 85 percent of Staples’ customers are businesses, which creates new and unique challenges for engineers to solve. 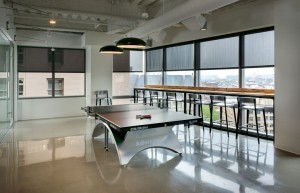 Even though more of those customers are moving online and Staples recently initiated a plan to close up to 225 retail stores in North America by next year, Masud believes its brick-and-mortar operations are an asset.  In fact, the company is planning to launch a new offering in the next 60 days that allows customers to buy products online, and then pick up orders at a designated store.

“I think we have an advantage there, definitely, without any question,” he said.

Staples is not alone in establishing an outpost in Seattle.

Several technology companies have migrated to the Pacific Northwest in recent years, hoping to capture some of the region’s engineering talent. eBay, Groupon, Splunk, Twitter, Facebook and Salesforce.com are just some of the companies that have established offices in the Seattle area in recent years.

Now, add Staples to the mix.