President Bill Clinton today keynoted the SharePoint Conference in Las Vegas, thanking the roomful of Microsofties for their longstanding support of the Clinton Foundation and spelling out a future in which technology can help solve global problems. The key, he said, is that technology be used for good, not ill. 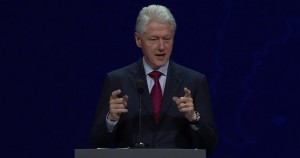 “Technology is liberating people, empowering them, but how they use it, and how you use it, depends in no small measure on identity — and whether in what we have in common is more important than our interesting differences,” Clinton said.

“My daughter used to make fun of me for being so technologically challenged, and they still do, my family,” said Clinton, adding that he always understood the implications of technology and “tried to get the big things right.”

“When I became president, there were only 50 sites on the Internet. More than that have been added since I started talking,” said Clinton. “The average cell phone weighed five pounds, 21 years ago. So, I suppose, with the changes that have occurred, it is proof positive that this stage has been shaped as much by technological change as by anything else.”

Clinton, who was recently interviewed by Wired magazine alongside Microsoft co-founder Bill Gates, provided a litany of examples of how technology was changing the way the world came together amid global disasters, such as the devastating 2010 earthquake in Haiti. He also described how technology fueled the economic recovery during his administration, accounting for 20 percent of job growth and one third of the wage growth during his 8-year run.

But he also provided a warning about the use of technology for ill-will, and why people must now, more than ever, come together.

“This modern world has been pretty great for us. But, as you can see, there are still a few challenges. What I would like you to think about today is, as we look at the 21st century world, first of all, what do you think is wrong with it, and how do you want it to come out? How do you think about what you’d like the world to look like when you have children your age? Is it even possible for you to look at, since you are living on the cutting-edge of technology everyday? Even a great company like Microsoft, knows that its future depends upon staying out on that edge, and not going out so far that if you make a mistake the whole thing could collapse.

For me, it is a pretty simple proposition. I have seen for 20 years now, since the end of the cold war and rise of this amazing technology, the world grow more and more interdependent. But interdependence simply means we can’t get away from each other.

We can’t divorce ourselves from the events taking place around the corner and around the world. Technology can pull us closer and closer together, but it can also do so in ways that are good, or bad. Road side bombs. Smuggled centrifuges to develop nuclear capacity. Just traveling bacteria… For me, it was a simple question: I wanted to build the positive and reduce the negative forces of our interdependence. I wanted the world to be based on share responsibilities, shared opportunities and prosperity and a shared sense of community, not one in which we erase our interesting differences, but one in which we recognize that our community humanity matters more, and unless we act as if it matters more, we will never be able to preserve many of those differences.”