Winds coming off the Pacific Coast could soon provide energy to Americans thanks to a Seattle company.

Principle Power, a renewable energy technology developer headquartered in the Pioneer Square neighborhood, received a go-ahead from the Bureau of Ocean Energy Management to submit a formal proposal to use 15 square miles of federal waters off the Oregon Coast for its $200 million WindFloat project.

The project would use five floating platforms with 6-megawatt turbines near Coos Bay, Ore., and would be the first floating offshore wind-energy project installed in the U.S. It would also be the first offshore wind project off the West Coast and could generate enough electricity to power 10,000-to-12,000 typical homes each year. 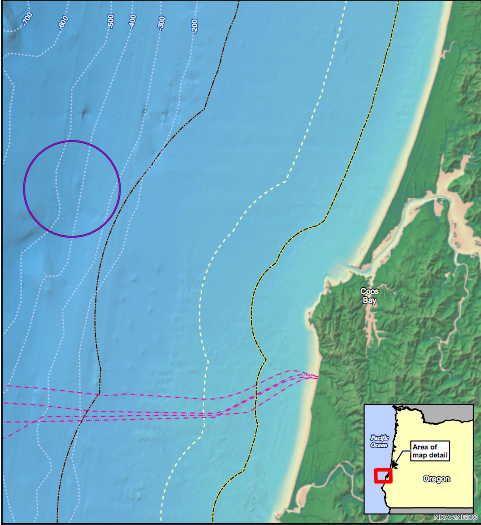 Each WindFloat measures 600 feet tall and would be secured by three mooring lines to keep it from floating away. Principle Power has spent more than two years operating a prototype WindFloat off the coast of Portugal that is producing electricity and sending it to the grid. The company said that the prototype has weathered 50-foot waves and had no problems with similar storm events.

Back in December 2012, Principle Power received $4 million from the U.S. Department of Energy for this project. Principle wants to have the windfarm operational by 2017, but the government wants to make sure beforehand that it understands how this project would affect things like fishing industries and the marine ecosystem. However, Principle has been talking to local commercial fishing fleets since 2011 about the proposed site and notes that it is outside of navigation and transit corridors.

While installation of offshore wind farms have been slow in the U.S., European Union countries have built more than 2,000 offshore turbines that provide 6,562 megawatts of capacity.

Check out the video below to see how Principle installed its prototype in Portugal: