I woke up this morning thinking about WhatsApp.

Not so much about the mouth-dropping $19 billion price tag that Facebook put on the five-year-old Santa Clara, Calif.-based startup, the biggest venture-backed M&A exit ever.

But why a deal of this size, style and scope is so desperately needed in Seattle.

I’ve argued in the past that the best thing that could happen to Seattle’s sleepy angel community is to experience an Instagram-style exit — a rocket ship success in which a small group of angel investors get fabulously rich almost over night. 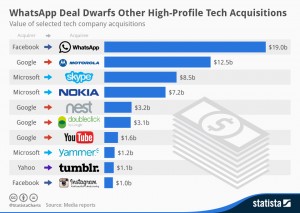 My contention is that an Instagram or WhatsApp deal would positively infect the Seattle investment community, a much-needed contagion sparking a wave of angel investment. Many have argued that Seattle’s wealth — and, yes there is plenty of it — is tied up on the sidelines, not being recycled into the startup community.

I agree. One of the reasons is that the people who made their money on Microsoft or Amazon.com are too far removed from the entrepreneurial ecosystem.

But that can change, and it can happen quickly. And it can be led by just a small crop of individuals.

I can almost imagine it now. A buddy down the street in Medina or Laurelhurst or Madison Park plops $250,000 on some unknown startup, and just a few years later that stake is worth $5 million, $10 million or $25 million.

This is a different type of outcome than the Tableaus, Zillows and Isilons of the world —which interestingly enough have a combined value that’s about half of what Facebook just paid for WhatsApp.

Those companies were built over time, with blood, sweat and tears. There’s certainly nothing wrong with those types of companies. They are solid, and help form the bedrock of the community. In fact, Seattle has produced some great home runs in recent years.

But to get the juices really flowing in the region, I’d love to see an overnight success from an unknown entrepreneur who seemingly comes out of nowhere to conquer a chunk of the tech world. That would enliven the community.

That was certainly the case at WhatsApp, whose co-founder Jan Koum’s rags-to-riches story reads almost like a Disney tale. Koum, who reportedly owns 45 percent of WhatsApp, moved to Silicon Valley with next to nothing at 16 from politically repressive Ukraine.

As Forbes reports, Koum chose the North County Social Services office in Silicon Valley to sign the Facebook acquisition paperwork, a symbolic location since that’s where his family once obtained foods stamps.

Koum and co-founder Brian Acton were able to scrounge up $250,000 in seed financing from some of their old buddies at Yahoo, money that allowed the scrappy startup to survive until powerhouse Sequoia got involved, first investing $8 million and then another quiet round of $50 million last summer.

The other wonderful thing about a WhatsApp-style deal is that the founders — who are still startup guys a heart — are now fabulously rich. They’ll probably stick around Facebook for some time — in fact they are likely locked into a fairly long-term agreement given the amount of money at stake. But what happens when they decide to leave, and put some of that wealth to use?

However you look at it, WhatsApp is an amazing startup success story, one which tends to play out more often in Silicon Valley.

Isn’t it time we see a couple of those around Seattle?