My home may be 114 years old, but I remain on a quest to outfit it with the latest in home technologies. I’ve taken a look at the Nest Thermostat and the Nest Protect smoke alarm, so thought I should get in on the first shipment of Wally, the in-home sensor network designed to detect water leaks before they become a huge headache.

Water leaks and homes do not mix. In my day job selling real estate, I’ve seen all sorts of water damage. One of my sellers had a vacant condo where the water heater sprung a leak and caused more than $20k in damage to the condo below. Another unoccupied home had a finished basement that flooded with 3 inches of water when a pipe burst, causing ~$30k in damage. Yet another home had a crawlspace that was infested with mold from standing water. Wally reports that water and freezing damage is the second highest reason for home insurance claims, averaging $6,965 per incident, and is designed to detect these problems when they start.

Wally is created by SNUPI Technologies, a Seattle startup spun-off of a University of Washington research project called, not surprisingly, SNUPI. For the electronics geeks out there, SNUPI stands for Sensor Nodes Utilizing Powerline Infrastructure and you can read up on exactly how it works.

The premise of SNUPI is that wireless communication power consumption is the biggest barrier to widespread computing devices. It simply requires too much juice for devices to constantly communicate via WiFi or Bluetooth. SNUPI uses a hub plugged in to a home’s wiring, and is able to use the wiring in the walls to function as a gigantic antenna array. The result is that you can use ultra-low power devices to communicate with the network.

Because they operate at extremely low power, the Wally sensors will work off of a watch battery for ~10 years. With the power problem largely solved, it is not hard to imagine many new and novel uses for remote monitoring and wireless communication beyond just leak detection. The leak detection sensors are the first in a series of expected Wally home sensors and devices that will work on the SNUPI network.

Wally takes its cue from Apple and Nest, with beautiful packaging and a simple graphical setup. I may be dating myself, but the Wally hub and sensors felt like the spaceship that Mork used when he arrived from Ork.

Installation starts by setting up a Wally account and naming the locations where you are going to place your sensors. Obviously this is going to be any fixtures or appliances that use water, but could also be placed in your attic, crawlspace or even in a wall cavity. The only caveat is that there has to be some electrical wiring nearby.

Next, you plugin the hub to your network and then download the iPhone or Android app that you can carry around while you activate your sensors. (SNUPI says that a Windows Phone app is on the way too.) The sensors are small and unobtrusive, so easy to hide. Just make sure that either the vertical or horizontal metal contact points are touching a surface that could get wet, otherwise you won’t detect water. 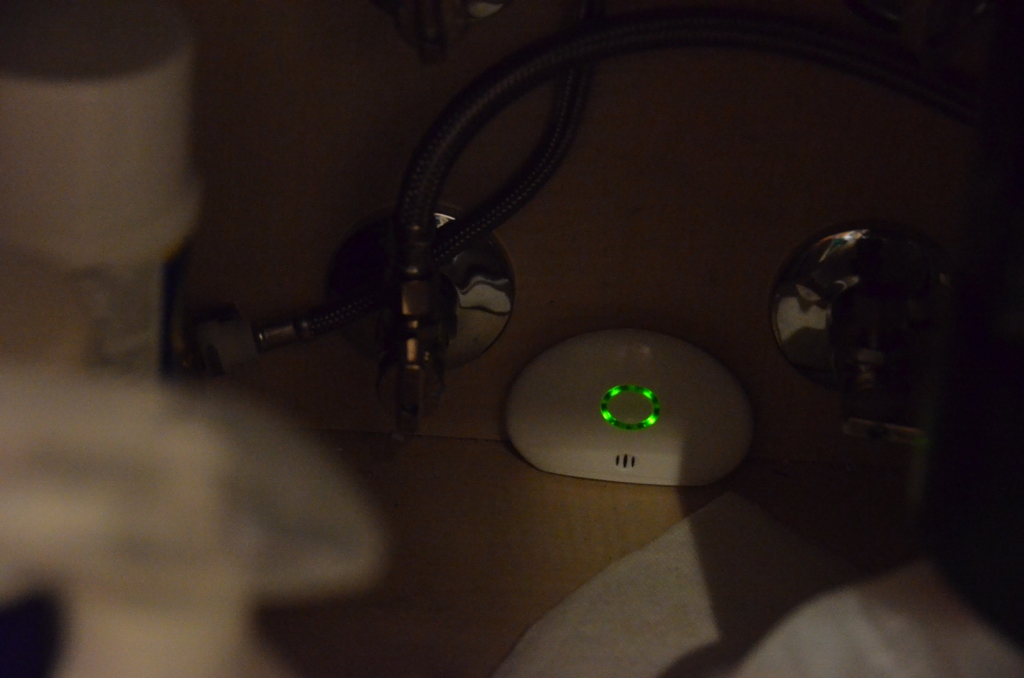 Wally blinks green to show that it is transmitting 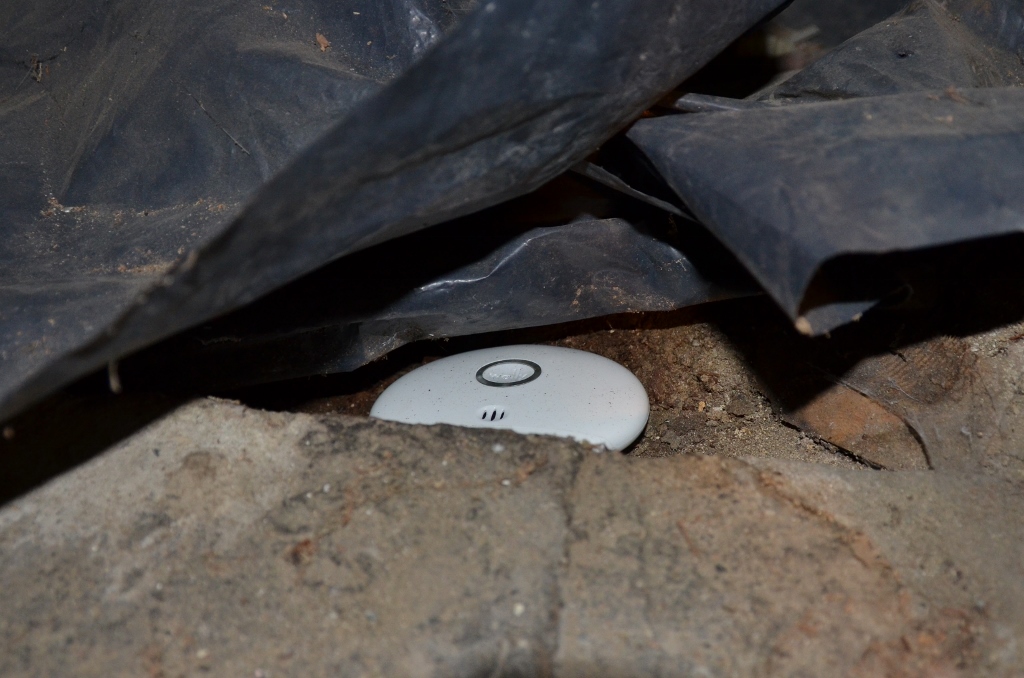 Wally sensor in a crawl space 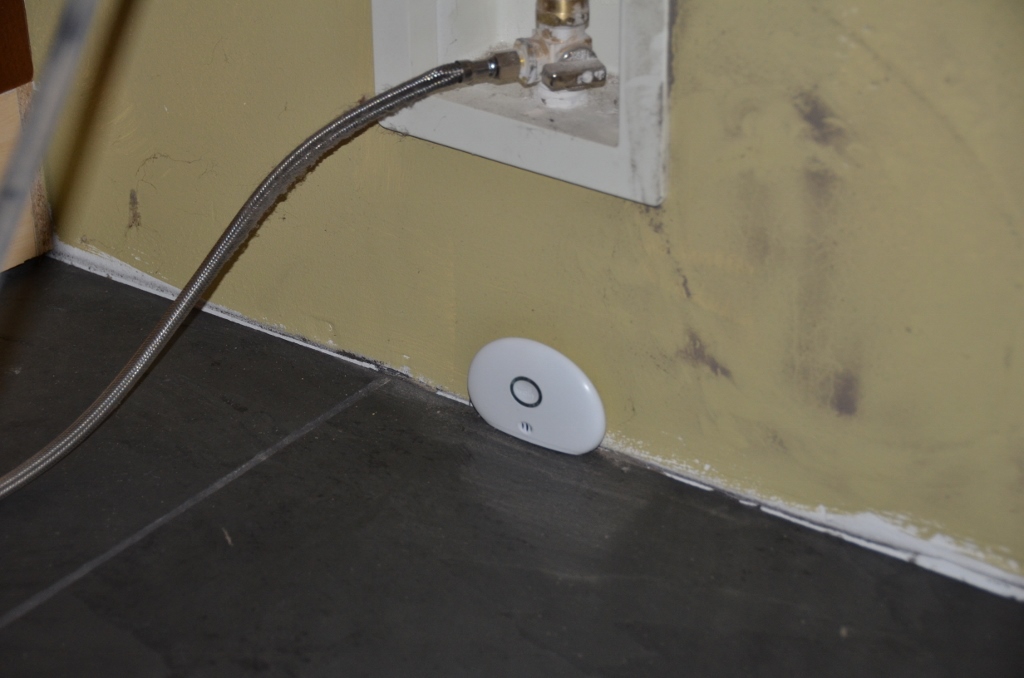 Wally sensor behind the refrigerator 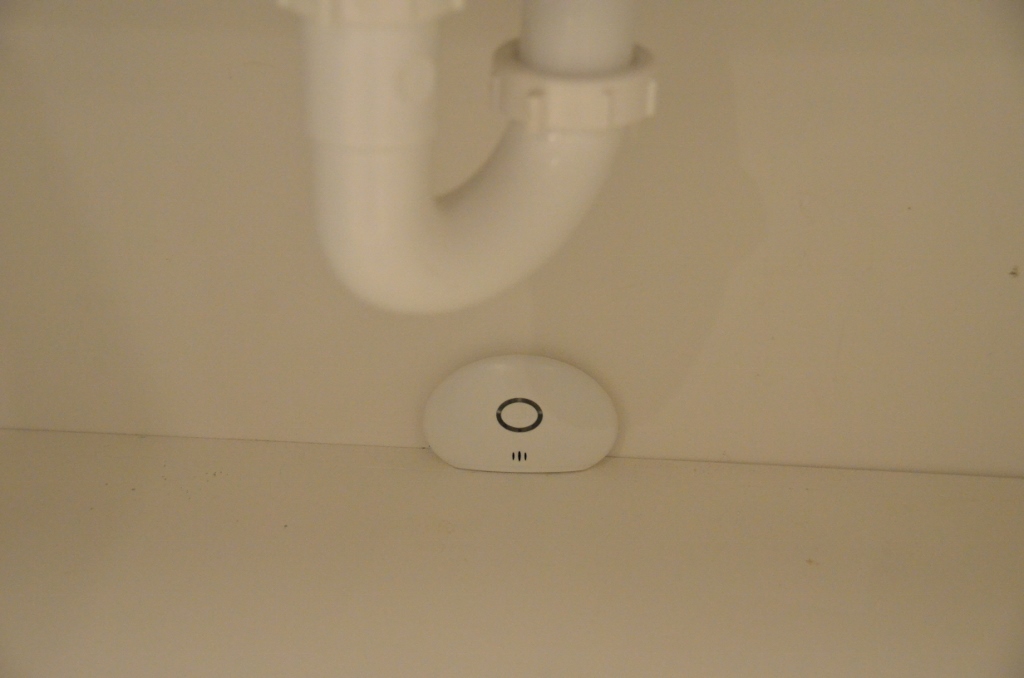 Wally sensor under a sink 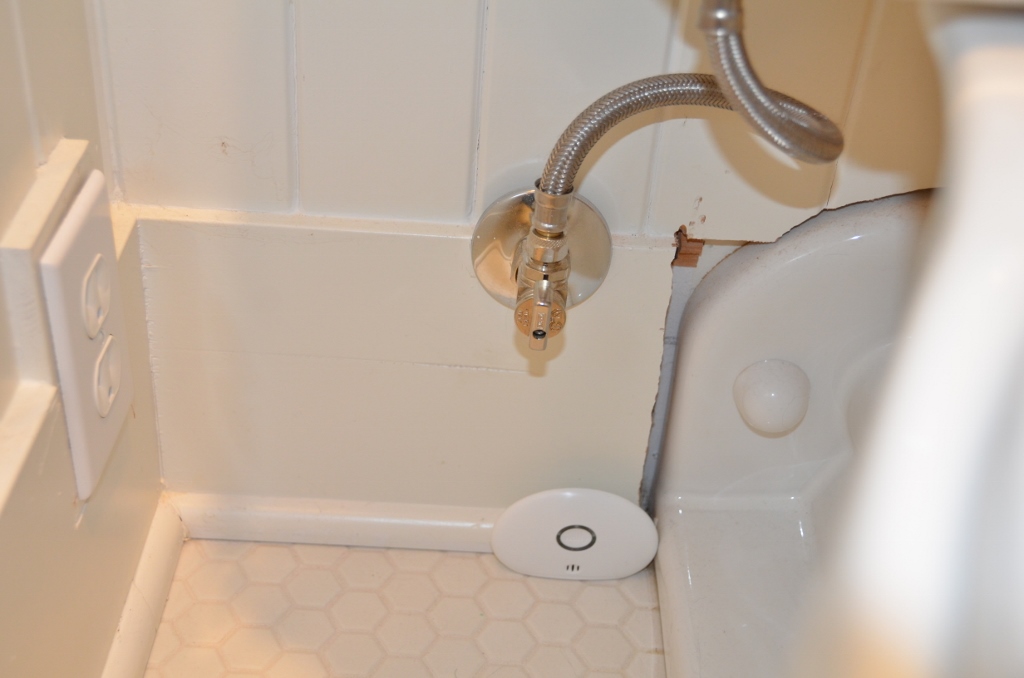 Wally sensor next to the toilet

Setup took me no more than 15 minutes to activate all 6 sensors, though I regret pulling out a refrigerator that hasn’t moved in 7 years. I spent more time cleaning the dust and cobwebs than I did installing Wally.

Once setup, the Wally sensors do their thing, quietly monitoring temperature, humidity, water and even motion. The motion detector isn’t implemented yet, but apparently will report when one of your sensors gets moved by a pet, child or cleaning person. You can set alert thresholds for temperature and humidity on a per sensor basis. 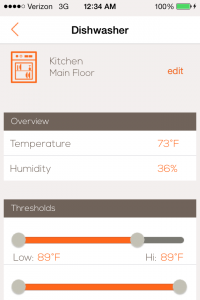 My water heater leaks regularly due to high water pressure at my house, so this was an easy test of the water detection capabilities. 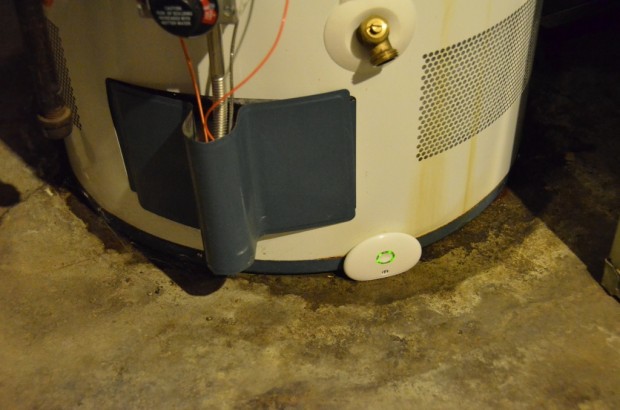 I was quickly alerted with a phone alert, text and email about the leak. 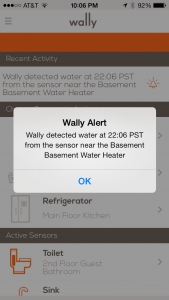 I’ve witnessed some pretty extreme water-related damage in homes, and my pocketbook has been the victim of a few water leaks as well. It is not hard to justify the $299 cost, especially for folks who have second homes that sit vacant or who aren’t home all the time. For example, if the water line for a toilet or washer sprung a leak when no one is home, the device could allow quick action to fix it.

Determining where exactly to place sensors did require a bit of thought. The hub comes with 6 sensors, which for a moderately-sized home may not be enough. I have 3 toilets and 4 sinks, plus a fridge, water heater, washer, etc. Certainly placing one sensor in the attic or crawl space doesn’t seem like enough, given the large size of these areas.

A few of the suggested placements, like a bathtub, left me scratching my head on whether it was worthwhile to monitor. Like many homes, my bathtub is enclosed by 3 walls. Setting a sensor right next to the tub does little, and I found myself wanting to jam one back in the wall cavity behind the tub, which is where nasty problems would actually occur. Placing a sensor behind a washer to monitor the water supply lines seems critical, but I bet most people won’t go through the hassle of pulling out the washer to put a sensor behind it. Sensors that are out in the open are susceptible to being moved around by a broom, pet, child, etc, and if the sensor gets flipped onto its wrong side, the moisture meter will no longer function.

I’ve seen lots of long-term water damage and rot occur within walls, usually from leaky roofs, siding or windows over the course of a number of years. Such damage is not readily visible from the outside, or even the inside sometimes. Wally could certainly monitor for situations like this, but I don’t think folks are going to open up the wall cavity all around the house. Even a 10-year battery life wouldn’t be enough if you are going to build your sensors in to the structure like this, and it left me wondering if home builders should build in little hatches under windows or at regular intervals along within the walls to accommodate sensors like this. Large condo or commercial buildings would find great usefulness for sensors like this if they could be cheaply deployed throughout the structure.

Wally is simple to setup and slick to use. Having such a system in place could clearly help watch for unexpected water leaks. It doesn’t have the day-to-day usefulness of something like a Nest Thermostat, but could really avoid some costly problems, especially for spots that you can’t readily see or times when something springs a leak when you are not home. I’m actually interested to see what other sorts of low-power monitoring and computing devices get built around the SNUPI technology as well.

[Disclosure: I used to work for Jeremy Jaech, the CEO of SNUPI, back when he ran Visio]