Growing up in California, Scott Kildall and his sister Kristin knew that their dad, Gary, was working on important things in the shack in their backyard. Little did they realize how important his work would become for the rest of us.

“We didn’t know at the time that what he was doing was revolutionary for the computer industry, in the real sense of the word ‘revolutionary.’ He was changing the way computers worked, from a business machine into a personal computer,” said Scott Kildall in an interview with GeekWire this week. “He always was thinking far into the future. He was a real inventor in that kind of way.”

Kildall, a Seattle native 1972 graduate of the University of Washington, was the creator of the landmark personal computer operating system CP/M, playing a critical role in the PC revolution. He will be recognized posthumously for that contribution, in addition to his invention of BIOS, with a rare IEEE Milestone plaque being unveiled this morning — joining the technology industry’s equivalent of the Hollywood Walk of Fame.

Kildall, who passed away in 1994 at the age of 52, has been called the “man who could have been Bill Gates,” thanks to a myth about him deciding to go flying rather than meet with the IBM representatives who decided to make their landmark deal for Microsoft’s MS-DOS instead.

That legend has been debunked, but Scott Kildall said this week that his dad wasn’t actually interested in being what Bill Gates became. 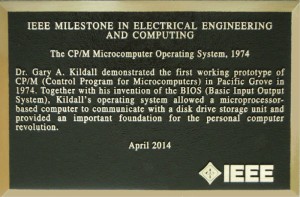 “He was a real inventor. He was much more interested in creating new ideas and bringing them to the world, rather than being the one that was bringing them to market and leveraging a huge amount of profits,” he said. “He was such a kind human being. He was always sharing his ideas, and would sit down with people and show flowcharts of what he was thinking. I think if he were around for the open-source movement, he would be such a huge proponent of it.”

So for the Kildall family, he said, the recognition for Gary Kildall is especially significant. “The IEEE recognizes inventors, and that’s their lineage,” he said, noting the rarity of the recognition. “It gives a historical context for his work that is just amazing.”

The plaque will be unveiled this morning at the original home of his Digital Research in Pacific Grove, Calif. For more on Kildall’s life and work, see this article by David Laws of the Computer History Museum about the creation of CP/M.

Update: See this post for some great pictures from the event, courtesy of the UW’s Ed Lazowska.