Microsoft this morning completed its purchase of Nokia’s devices and services business for more than $7 billion, bringing aboard another 25,000 employees and transforming itself into a smartphone maker overnight.

The deal, announced under the tenure of previous Microsoft CEO Steve Ballmer, will provide his successor Satya Nadella with perhaps his most significant challenge as he settles into the job.

Integrating large companies is difficult even when they’re in the same region, as evidenced by Microsoft’s failed, $6 billion aQuantive acquisition several years. Nokia’s operations are centered in Finland, but the companies have the advantage of having worked together as partners for several years on Microsoft’s Windows Phone. 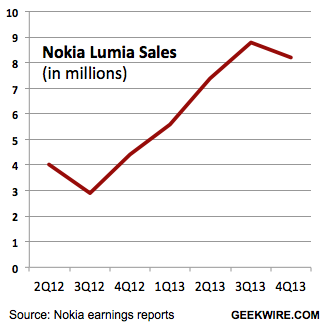 The move continues Microsoft’s transformation beyond its traditional software business into the world of hardware and device development. The Microsoft Devices Group, which has its roots in humble keyboards and mice, now includes Lumia smartphones and tablets, Nokia’s mobile phone business, the Xbox game consoles, Microsoft Surface tablets and Perceptive Pixel interactive displays.

With the completion of the deal, former Nokia CEO Stephen Elop returns to Microsoft as executive vice president to lead the group. But Microsoft is not acquiring two Nokia factories, as previously expected.

Nokia explained in a news release this morning, “In India, our manufacturing facility is subject to an asset freeze by the Indian tax authorities as a result of ongoing tax proceedings. Consequently, the facility remains part of Nokia following the closing of the transaction. Nokia and Microsoft have entered into a service agreement whereby Nokia would produce mobile devices for Microsoft.”

It continued, “In Korea, Nokia and Microsoft agreed to exclude the Masan facility from the scope of the transaction. Nokia will now take steps to close the facility, which employs approximately 200 people.”

Microsoft has struggled to gain traction against Android and the iPhone in the U.S., but the company signaled in a news release this morning that it has eyes on the next wave of mobile phone users. The company says it “will target the affordable mobile devices market, a $50 billion annual opportunity, delivering the first mobile experience to the next billion people while introducing Microsoft services to new customers around the world.”

Previously: Nadella: Microsoft will show ‘courage in the face of reality’