What has Ray Ozzie been focusing on since leaving his position as Microsoft’s chief software architect? Here’s the answer.

A new app and online service called Talko, from a company co-founded by the Lotus Notes creator and collaboration software pioneer, is aiming to bring the phone call into the modern era of cloud computing and connected devices.

Features include the ability to tag and bookmark specific moments of a call for easy reference and sharing afterward. For example, it’s possible to search all calls to find moments where a conversation was tagged #budget or #followup, or any other tag a user chooses.

Users can also take and share photos with each other using the app during a call, and send text messages through the app.

Talko can be used for one-on-one interactive conversations, but it’s particularly useful for group calls, such as team meetings.

The app can also be used for asynchronous conversations, letting people leave messages for a group or individuals, with the ability for users jump in seamlessly for a live call when someone else is leaving them a voice message via the app.

Talko resulted from Ozzie’s challenge to the team to rethink the way people communicate in the era of the Internet and smartphones. Despite all the innovation around the smartphone, he explained in a recent interview, the phone call remains largely isolated from other features of the device. 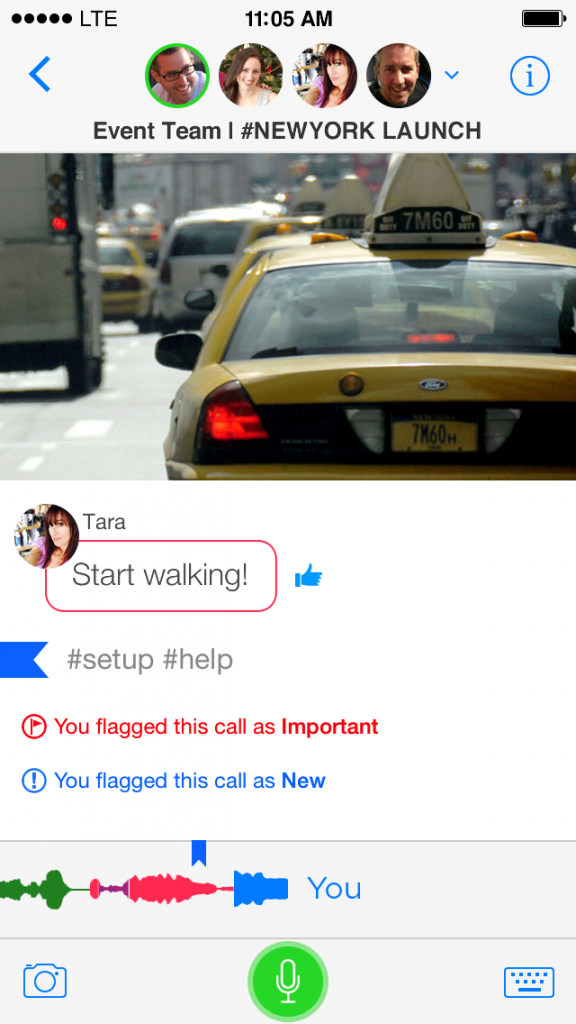 If the phone call had never been invented — if the Internet and the smartphone and cloud computing came along first — and some entrepreneur discovered the ability to transmit voice over the Internet, it probably would have taken a different form,” Ozzie said. “It would have been woven into the things that are meaningful to us.”

As demonstrated by Ozzie and co-founder Matt Pope during a recent visit to the GeekWire offices, the app is well-structured and easy to use, with square icons representing different contacts and groups, a unified stream of messages and notifications, and an easy-to-follow audio track along the bottom of the screen that shows when different people are talking during a call.

The app has been tested by more than 250 users for more than a year across a variety of businesses, including Brenthaven, the Seattle-based maker of bags and cases for laptops and other devices. With employees in Seattle and the Philippines, about half the company is using the app on a daily basis, said Scott Armstrong, the Brenthaven CEO.

“It’s an amazing tool. I’m a believer,” said Armstrong, who uses the app in part to quickly leave messages for team members at the end of the day, on his way home from work.

Armstrong said he has been particularly impressed with the call quality, especially given that they’re making overseas calls in many cases.

Ozzie, who launched the Azure cloud-computing service while at Microsoft, says the app is driven by a combination of Azure and Amazon Web Services. “They’re both amazing services,” Ozzie said, displaying his trademark diplomacy.

There’s no shortage of texting and voice messaging apps to provide competition, but Talko is taking a different approach from many of those by focusing on work collaboration. If it ends up being popular among teenagers, that would be fine, but it’s not the primarily goal, Ozzie says.

For Ozzie, this is the latest step in a long career focused on collaboration, dating back to the early PLATO Notes group messaging system and his startup Iris Associates, which developed the product that came to be known as Lotus Notes.

“I have this passion for wanting to see how technology can be used as an augmentation device, as a superconductor between the minds of people who are trying to get something done together,” Ozzie said.

Talko was founded by Ozzie and Pope along with Eric Patey, both of whom worked with Ozzie at Groove Networks and Microsoft. The Talko team — based in Boston, Seattle, and San Francisco — also includes a number of people who hadn’t worked with them previously, to bring a different and fresh perspective, as Ozzie explained it.

Talko is funded by Ozzie and investors including Andreessen Horowitz, Greylock Partners and Kapor Capital, whose partner Mitch Kapor, the Lotus Development Corp. founder and Lotus 1-2-3 designer, has been an instrumental figure in Ozzie’s career.

The app is free to use, but plans are in the works for a premium version that will allow for long-term archiving of calls. A full web experience and Android app are also being planned.

The Talko app for iPhone can be downloaded here.