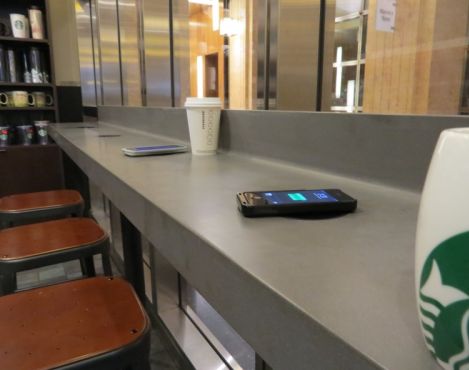 Your next visit to Starbucks might deliver a different kind of jolt.

After testing wireless smartphone charging in Boston and the Bay Area, the coffee giant and Duracell Powermat are starting to roll the technology out to Starbucks stores across the country. The Duracell Powermat charging spots will be embedded in designated tabletops at Starbucks locations, letting customers charge phones and other devices without plugging them into an outlet.

More phones are coming with this technology built in. But current versions of the iPhone, for example, will require a special case to work with the Powermats. PMA competes with the Qi wireless standard, but has the support of companies including AT&T, Blackberry, HTC, Huawei, LG, Microsoft, Qualcomm, Samsung, TI and ZTE.

“Rather than hunting around for an available power outlet, they can seamlessly charge their device while enjoying their favorite food or beverage offering right in our stores,” said Adam Brotman, chief digital officer at Starbucks, in a news release. “We were pleased with the customer response to the pilot tests, and we’re now expanding this offering nationally to provide our customers a quality and reliable experience as they use our stores as their respite, their office away from home or as a gathering place with their friends and family.”

The rollout is starting at Starbucks stores and Teavana locations in the Bay Area, and will expand to other large markets next year. The company says it will also launch pilots in Europe and Asia within the next year.