Big news for all you wizards out there: The insanely popular card game, “Magic: The Gathering,” is coming will be available soon as a board game.

Wizards of the Coast and Hasbro are making the announcement official tonight at the 2014 Internationale Spieltage (ESSEN) game conference in Germany, where it is early morning. As part of the announcement, the first photos of the game are being distributed, but other than that very few details are being disclosed — for instance, not even the game’s name. 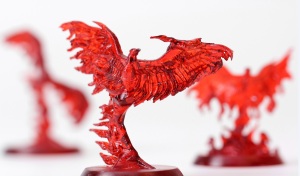 Here’s what we do know: The game will be go for sale in fall 2015, and while it will make references to some of the game’s characters and story line, board game players will not need prior knowledge of Magic, the card game.

While that may be the case, it will probably still sell best among the card game’s large and loyal fan base. Magic is a card game that encourages players to be completionists, by buying new cards throughout the year, so you can only guess that fans will be eager to add this to their collection, too.

The board game version is being described as a “tactical miniatures game,” taking 25 to 45 minutes to complete. Players must customize their battlefield by designing the map. Then, players choose one of five wizards, called Planeswalkers, who move around the map. Players can cast spells, summon powerful squads, and tap into their Planeswalker abilities to outmaneuver opponents. The last Planeswalker standing wins.

The board game was developed by Renton-based Wizards of the Coast, which originally produced Magic: The Gathering with help its parent company, Hasbro. The team at Hasbro working on the project include the folks that created Risk Legacy and Heroscape.

No word on pricing, but the game will be widely available in hobby shops and mass retailers.

Editor’s note: Hey, board game geeks, just a reminder that our annual GeekWire Game Night — featuring Settlers of Catan and other board game favorites — will be taking place Nov. 11 at the Spitfire bar in Belltown. Sign up here!