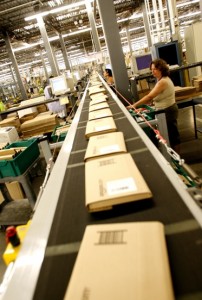 Amazon.com is going on another hiring spree for the holiday season, as the Seattle retailer announced late Wednesday that it will hire 80,000 seasonal workers this year.

Amazon noted that it has more than 50 fulfillment centers in the U.S. and plans to have more than 15 “sortation centers” by the end of 2014. The online retailer has been growing its network of fulfillment centers at a rapid pace in recent years, looking to distance its lead in e-commerce against rivals such as Target and Wal-Mart, which plans to hire 60,000 holiday workers this year — up 10 percent from 2013.

The company, which recently introduced Sunday delivery, said that it has converted more than 10,000 seasonal employees into full-time staffers this year, and that it plans to do so again after the holidays. Those interested in applying for a temporary job can do so here.

In its most recent earnings statement, Amazon reported 132,600 full- and part-time employees — not including seasonal workers. That’s up 37 percent year-over-year.