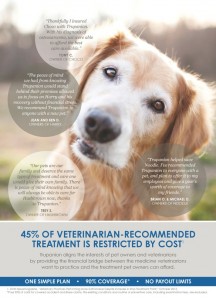 The company, which is based in Seattle’s Ballard neighborhood, today priced its IPO at 10 per share raising about $71 million. That was below the company’s projected range, which was set at $13 to $15 per share and could have reeled in up to $122 million, including shares allocated to underwriters.

The company lost $4.9 million during the first quarter and has accumulated a $40.9 million deficit since it was founded. It is backed by Maveron, which owns a 33 percent stake of the company, and led by CEO Darryl Rawlings.

“Our data-driven, vertically-integrated approach enables us to provide pet owners with what we believe is the highest value medical plan for their pets, priced specifically for each pet’s unique characteristics,” the company writes in a SEC filing. “Our growing and loyal member base provides us with highly predictable and recurring revenue. We operate our business with a focus on maximizing the lifetime value of each pet while sustaining a favorable ratio of lifetime value relative to acquisition cost.”

Trupanion is the second Seatle company to go public this year, following in the footsteps of biotech Alder Biopharmaceuticals which went public in May.