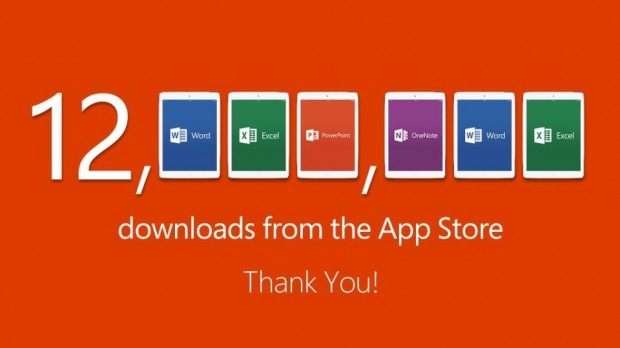 How ’bout them Apples? A week after launching Office for iPad, Microsoft says there have been 12 million downloads of the apps.

It’s actually not a huge surprise, given the size of the Office installed base and the popularity of Apple’s tablet. From the start, it was clear that these apps were filling a need. They quickly shot up to the top of the App Store’s charts, and have stayed at the top in the week following their launch. They’re not slap-dash affairs, either: Microsoft created a set of apps that feel at home on the iPad, and it seems like the market is rewarding them for it. 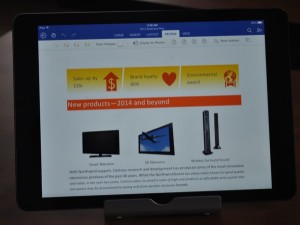 It also probably helps that the apps are free to download and use to read Office documents, though users need to have an Office 365 subscription to edit documents. While Microsoft has been trying to entice people over to the subscription version of Office, including offering a free 365 subscriptions to some lucky folks, it’s not clear how many of the 12 million app downloads are backed by a paid subscription for Microsoft.

Microsoft’s success is also a positive sign for Apple, which takes a 30 percent cut of any Office 365 subscriptions sold through the iPad app. That doesn’t mean Apple’s sitting back on its haunches, though: the company recently updated its iWork productivity suite with new features to better compete with Office.

The launch of Office for iPad seems to be a sign of a new strategy from Microsoft. At yesterday’s Build conference keynote, company executives went out of their way to show how tools like Microsoft Azure and C# can be used to develop for platforms that aren’t controlled by Microsoft. While they were happy to show off the capabilities of their platforms, it seems like Microsoft is taking a slightly more pluralistic approach to their vision of the future.