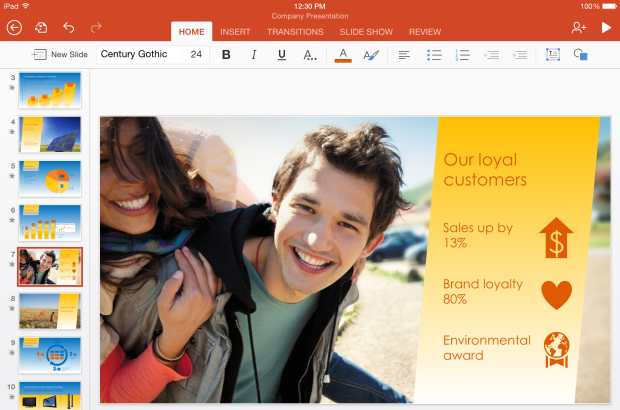 There’s nothing quite like free as motivation. That’s one clear message after Microsoft began allowing users of its Office suite on iPhone and iPad to create and edit documents without an Office 365 subscription.

Microsoft Word has taken the top spot in both the iPhone and iPad free app charts in the App Store, while Excel and PowerPoint are in the top 10 on the iPhone and top 5 on the iPad as of this writing. That’s good news for Microsoft’s iOS ambitions, since the company is competing against Apple’s free iWork productivity suite as well as Google Drive and a slew of third-party productivity apps.

The performance on the download charts is reminiscent of the launch of Office for iPad, which rocketed up to the top spot in the App Store charts just a day after launch, and the Office for iPad apps saw 12 million downloads in the first week of their availability. The company said prior to last week’s announcement that it had reached 40 million downloads.

When Office for iPad launched earlier this year, Microsoft allowed people to download it for free, but required that they purchase an Office 365 subscription in order to edit their files. But customers are often reticent to part with their money on the App Store, and signing up for a subscription to Office may have seemed silly to those who still own boxed versions of Microsoft’s productivity software.

An Office 365 subscription starts at $6.99 a month. The company is risking significant revenue by making document creation and editing free, but it’s betting that the shift will help its business in the long run by significantly increasing its overall base of users.