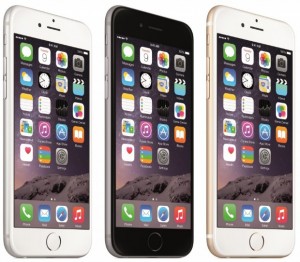 People who have been missing ringtones purchased through the iTunes Store on their iPhone or iPad since the launch of iOS 8 have reason to rejoice – Apple has released a new update to iOS that includes support for restoring those tones. Once users have installed the patch, they can restore the tones by visiting this link on their iOS device.

Your mileage may vary – I lost the version of “Ain’t No Rest for the Wicked” that I purchased, and Apple told me that my tones were unaffected. That may be expected behavior on Apple’s part, because Cage the Elephant pulled that ringtone from the iTunes Store since I purchased it.

The ringtone restoration is the only high-profile bug fix, but as usual, the update includes security patches and minor bug fixes to help improve users’ device performance. 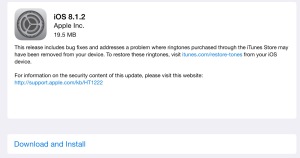 Users can install the update by connecting their device to a computer running iTunes or by opening the Settings app and then going to General > Software Update. It’s a fairly small update, clocking in at only 28 MB on my iPhone 6 or 20 MB on my 4th generation iPad. Of course, these updates are cumulative, so users who haven’t installed another, larger patch will have a larger chunk of software to install.

As always, users should make sure to back up their devices before installing any update, just in case something happens to go sideways. So far, nobody seems to be reporting problems, but it’s always worth being safe.