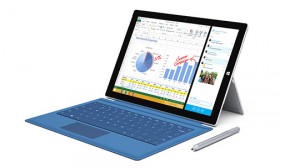 As a part of its regular Patch Tuesday update cycle, Microsoft has issued updates for Windows 8.1, the Surface Pro 3, Surface Pro and Surface RT alongside its usual complement of security patches.

Microsoft said last week that it will now be releasing regular updates to Windows 8.1 as a part of Patch Tuesday, rather than waiting to bundle all of them together in one large update. In a blog post, Microsoft called out three new features in particular that users would see as a part of this month’s update:

Surface Pro 3 users get improvements to hardware compatibility with this month’s update. Microsoft’s bulletin calls out improvements to how the device handles the Surface Power Cover and Surface Ethernet Adaptor. In addition, the LifeCam Front front-facing camera got an update that will decrease power consumption during Skype, add support for Flash and improve stability.

The original Surface Pro got an update that improves the performance of its wireless card, and the Surface RT’s patch “improves overall system stability.” Surface 2 and Surface Pro 2 users were left out in the cold this time around. Surface users who are eligible for updates should get prompted to install them soon, though Microsoft said not everyone will be asked to update today.