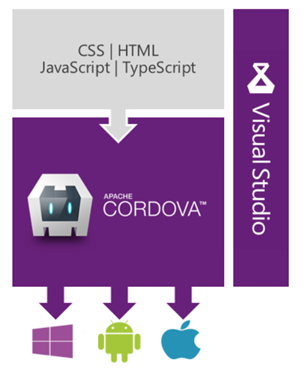 As a part of its TechEd conference in Houston, Texas today, Microsoft announced an update to its Visual Studio development environment that will give developers the ability to build cross-platform mobile apps using Apache Cordova.

Today’s announcement means that Windows developers who are comfortable with Microsoft’s environment can continue to use Visual Studio, while creating apps that run on Windows Phone, Android and iOS all at once. It’s a significant move for Microsoft. The company has partnered with third parties like Xamarin to provide cross-platform development using .NET, but this integration lets developers use Visual Studio to build apps for Android and iOS.

Cordova is designed to let developers easily create native applications for the vast universe of different mobile devices out there by building one app using web technologies like HTML and JavaScript. The resulting app is compiled as a native executable for devices, so developers can upload them to each platform’s app store.

Visual Studio users will be able to run a number of simulators to test their code, and Microsoft’s Cordova implementation allows users to run a remote agent on a Mac to build and simulate how their code will work on iOS.

The news comes a little more than a month after Microsoft’s Build developer conference in San Francisco, where the company highlighted its cross-platform capabilities, showing off iOS and Android compatibility for new technologies that were announced on stage there. The announcements show a changing Microsoft that’s trying to position itself as a hub for all the different mobile and desktop platforms developers are expected to use.