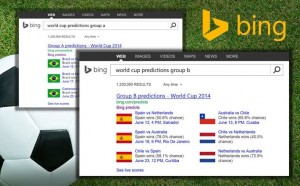 Microsoft Bing’s prediction technology was perfect in the World Cup knockout stage — depending on how you look at it.

Bing was 15 for 15 in picking the winners of each knockout match, including Germany’s 1-0 win over Argentina in today’s final.

But Microsoft incorrectly predicted that Brazil would beat the Netherlands in Saturday’s rather meaningless third-place match. So, if you’re counting Holland’s 3-0 win over the Brazilians, Microsoft was technically 15 out of 16.

Regardless, it’s still pretty impressive especially since Bing only had a 60 percent success rate (29 of 48) through the World Cup group stage.

Microsoft, which has found success predicting other competitions in reality TV contests, is using data like the teams’ records, strength of schedule, margin of victory in past matches, whether the location gives a particular team a home field advantage, and the influence of factors including weather and type of playing surface.

It should be noted, though, that there were very few upsets in this year’s World Cup knockout stage — the statistically-favored team usually came out on top.

Still, Microsoft managed to edge Google in terms of World Cup predictions. Google also used its own technology to pick match outcomes and finished 14 of 15, or 14 of 16 if you count the third place match.