J Allard knows first-hand how miserable it can be to try and recover a stolen bicycle. Now the Xbox co-founder has dedicated his new career to making sure fewer people experience the same pain and frustration.

Allard, who left Microsoft in 2010 after 19 years at the tech giant, is CEO of a Portland-based company called Project 529 that’s trying to solve the growing bike theft problem with a mobile registration database solution. 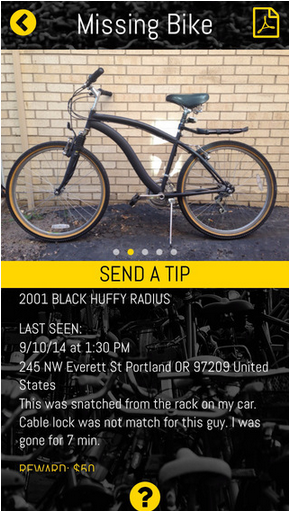 Allard was inspired to build Project 529 after a thief snatched his custom-built, tricked-out ride three years ago. It took 73 days for Allard to get his bike back — an experience that still frustrates him to this day.

The only problem was that the police couldn’t do anything because Allard did not have good enough proof of ownership; eBay didn’t help for the same reasons.

So Allard, the founding member of a 30-person mountain biking team, dug deeper and soon found that the thief was also selling laptops. After winning a $300 online auction for one of the devices, Allard took apart the Windows machine and learned that it, too, was also stolen.

He put his Microsoft skills to good use and figured out who the actual owner was; turns out she had recently filed a car prowl police report. This helped create probable cause for the police, who eventually tracked down the suspect and recovered Allard’s bike.

After more than 80 hours of legwork, Allard finally managed to snag his two-wheeler back. But he certainly left this experience learning how exposed bike owners were, and knowing that it shouldn’t be so difficult for them to recover stolen bikes.

“Until that point, I had no idea how important it was to maintain a registration of your bike,” he said. “We register our cars, our motorcycles — the government keeps a database on that. But I’ve spent my whole life cycling and never thought to register my bike.”

This is exactly what Project 529 is all about — using individual serial numbers and photos that give each bicycle a form of identification, making it much more difficult for thieves to successfully sell their stolen goods online.

The startup, founded by Allard, Lara Ferroni, and Jason Scott, uses a combination of smartphone technology and crowdsourcing to help reunite an owner with his or her bike. Users can register their bike online for free, upload photos, serial numbers, and any other identifying details that may be crucial when a police report or insurance claim is needed.

If your bike is stolen, a panic button on Project 529’s app sends out a notification to other users, alerting them of the location and time of the stolen bike — this creates what Allard calls a “community neighborhood watch for bikes.” The app can also notify local law enforcement.

Allard said bike theft is an “epidemic,” and one that he pegged as a $400 million problem in the U.S. alone. As this Seattle MET feature outlines, 1,121 bicycles were stolen in Seattle last year — a number that’s likely far lower than the actual amount of stolen bikes, and one that could increase with the city encouraging more bike riding.

There are solutions to this problem that exist today, from the National Bike Registry to the Seattle Police Department’s @GetYourBikeBack program. But Allard said these systems are passive and don’t take advantage of smartphones — focusing on mobile is Project 529’s secret sauce, Allard said. 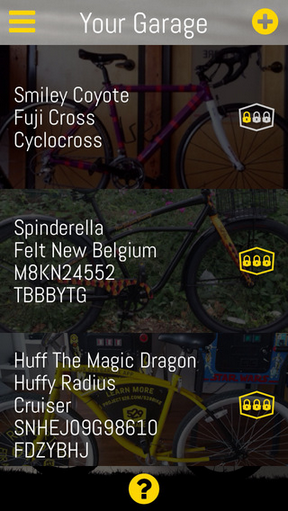 “Not only is mobile the most convenient way to collect photographs and enter key details of your bike, but it also means that everyone in our community has our software in their pocket once they register,” he explained. “If a member’s bike goes missing, they simply tap out a few details and everyone in the 529 community within 10 miles gets an instant alert so they can keep an eye out and report a tip back to the victim if they see something. It’s like neighborhood watch that can help catch a thief before they pedal out of the zip code.”

Project 529 also wants to create a BIN (bicycle identification number) standard that helps track bikes from manufacture, through distribution, to sales and re-sales like we already do with cars. The company recently sent a petition signed by more than 50,000 people encouraging eBay and Craigslist to require sellers to include serial numbers of bikes they are selling, but has not heard back from either company.

“Thieves are making out like bandits on online sites like eBay and Craigslist,” Allard explained. “There is no risk. You can’t sell a motorcycle without a VIN, but you can put a bike up there and have tons of plausible deniability.”

Project 529 — the name means the opposite of 9 to 5, or as Allard says, “the important hours of the day” — just launched its iOS app in July and has a beta Android app now available. The startup also as an array of partners, from police departments to biking clubs. But perhaps the most exciting opportunity lies with universities, which have a huge concentration of bikes owned by tech-savvy students equipped with smartphones — an ideal place for Project 529 to operate, and a potential key revenue stream (the app and service is free for general users). The company has already partnered with the University of Washington as its official bike registration partner and is working with the University of Oregon on a pilot programs. 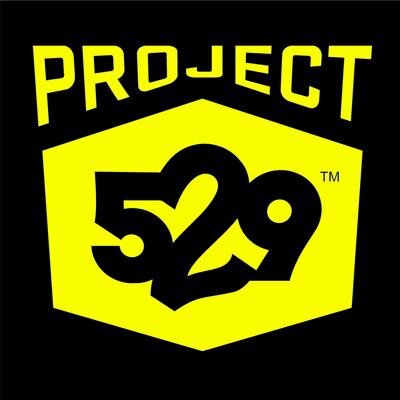 Allard said he “loved the budget” at Microsoft, where the 19-year veteran helped create numerous products and services like the Xbox, Windows NT and Internet Information Server. But he’s clearly passionate about his new team and opportunity, particularly in an industry that could use some better technology.

“It’s so analog you wouldn’t believe it,” Allard said of the bike industry. “It is probably two full generations behind on the tech curve.”

The ambitions for Project 529, which is bootstrapping for now, extend far past just bike security and into other cycling verticals. But this is the first step — and it’s certainly an important one for the seven-person team.

“The epidemic is bigger than we thought it was,” Allard said. “The business opportunity is real.”