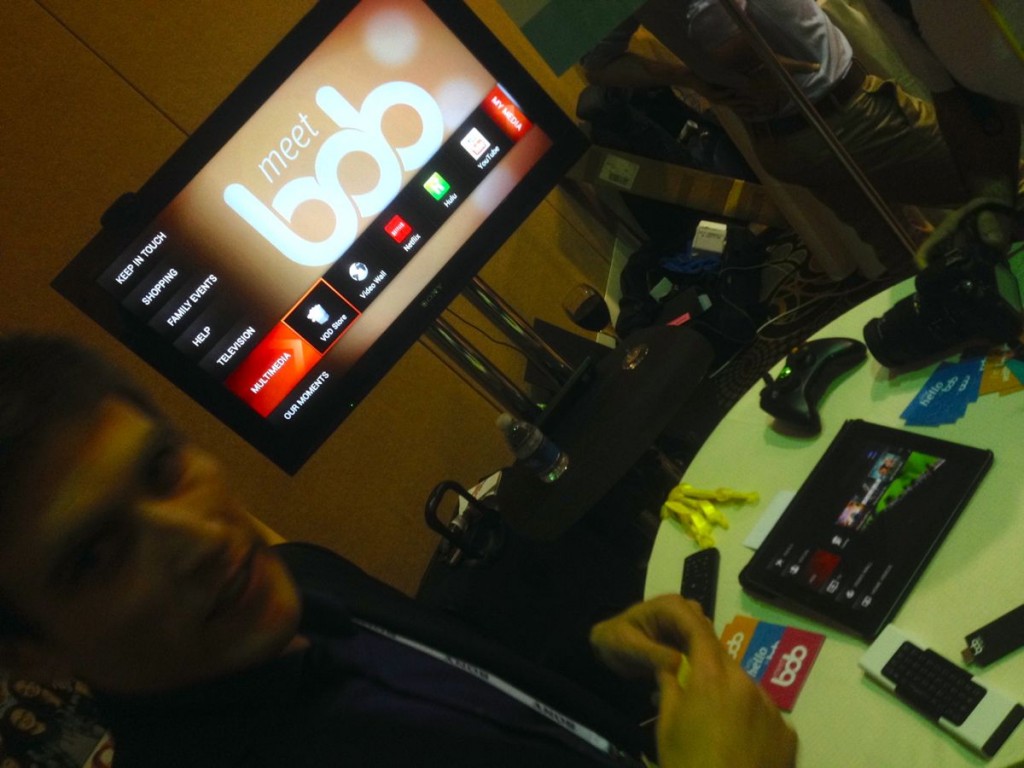 LAS VEGAS — Is the world ready for a new Bob? One technology company thinks so.

As I walked into the ballroom at the Mandalay Bay for the “CES Unveiled” event tonight, the first thing that jumped out at me wasn’t the flying mini-helicopters, the new hybrid notebook/computers or even the buffet. It was a booth over to the side that proudly proclaimed, “Meet Bob.”

No, thankfully, it’s not a new incarnation of Microsoft Bob — the ill-fated virtual home and alternative user interface that was an epic flop after it was rolled out for Microsoft Windows nearly two decades ago.

The new Bob is a TV-based hub for family activities — including social television viewing, shared game experiences, parental controls, pictures, video chats, and even baby monitoring, among other features.  It’s an Android-based HDMI stick that plugs into the TV and works in conjunction with a cloud service.

The interface can be controlled with a variety of devices, including a remote control and an Xbox controller. The Israeli company that makes the service, Meet Bob, is a subsidiary of the Comigo set-top box tech company.

Each family member has a password-protected user profile through the service. As a bonus, the HDMI stick makes the experience portable. The company is planning to bring the service to market through TV operators and other partners this year.

When I walked up to the booth this evening, I assumed that they heard the Microsoft Bob question all the time, but Comigo CEO Dov Moran, an Israeli businessman and serial entrepreneur, at first wasn’t sure what I was talking about when I mentioned Microsoft Bob. As I described what Microsoft Bob was, he remembered — but he didn’t seem worried about any type of bad luck associated with the Bob name.

“Our Bob is much cooler than the other Bob,” he said with a smile.

Lotan Levkowitz, vice president of business development, explained that the name is meant to evoke a friendly uncle who always wants to bring everyone together for a family picture or activities. Here is the company’s pitch video, explaining Bob in more detail.