Tucked on the fifth floor of a brick office building in Pioneer Square, Marc Barros is attempting to create Seattle’s next great hardware startup. The entrepreneur, best known as the founder of headset video recording maker Contour, is starting small.

But that’s exactly the point. Hardware companies no longer need to burn through millions of dollars, just to get to a proof of concept. Instead, they can iterate quickly, applying the bootstrap minimum viable product approach historically used by Internet and software companies.

And that’s exactly the technique that Barros is taking with Moment, which is unveiling itself today with a $50,000 Kickstarter campaign.

Moment in many ways ties into Barros’ past. While Contour was all about video, Moment is targeting still photography.

The 5-month-old company is prototyping two lenses — a wide 18 millimeter lens and a 60 millimeter telephoto lens — that attach seamlessly to the iPhone and Galaxy Nexus line. (Most phones feature a 33 millimeter lens).

The idea? Make those smartphone photos you take on the fly, truly amazing.

“We started this brand, Moment, because we just love to take pictures,” says Barros. “We believe that photography is in your pocket.”

When Barros showed me the prototypes at the offices yesterday, the lenses attached magnetically to the camera lens of an iPhone. However, the next iterations will use a “bayonet style” lock and screw method to more securely hold the lens in place.

Moment does face competition from OlloClip, which sells a family of lenses for $69 to $99 that utilize a specialized clip to attach to an iPhone.

“In OlloClip, you actually have to take off your case to use it or buy their special case,” said Barros, adding that his competitor’s product only works with the iPhone.

In the case of Moment, Barros and Chief Product Designer Erik Hedberg have created a credit-card wide skin that attaches to the back of an iPhone and fits under existing cases.

“The idea is that your camera is always lens ready,” said Barros. “We realized, just do one thing really well, which is awesome imagery.”

The lenses will likely range in price from $100 to $200 at retail, though the Kickstarter is starting at $50 for one lens and $99 for both lenses. So far, the company has already raised more than $2,200 on Kickstarter. Its goal is to have the product on the market by early summer. 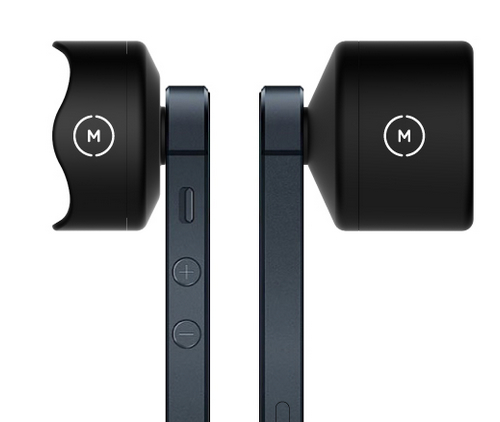 Moment could be just the first step for Barros and Hedberg, who have raised a small amount of cash to get the concept off the ground and have partnered with brand wizard Richard Tait of Golazo and Cranium fame.

“Ultimately, we’d like to build a hardware studio where we launch a new brand every 18 months,” says Barros. Doing so, Barros thinks he and his team can spin off hardware startups relatively quickly that generate $6 million to $8 million in revenue.

“From that point to a massive sustainable hardware company is a chasm,” said Barros. “When you hit that point, you have to decide to sell the business or raise a bunch of money for it. At Contour, we hit that point and just missed it. We got to be a $15 million company, and we raised $5 million. It just wasn’t enough capital to build the category. You can’t miss that inflection point.”

Contour ended up selling its assets last year for just $1.9 million, while GoPro has continued to emerge as the dominant brand. Barros has been extremely forthcoming about the mistakes he made as an entrepreneur at Contour, and he’s hoping that Moment represents a new chapter for him.

“I’ve always loved pictures. And, I realized after Contour, that I really wasn’t a video guy. I wasn’t about editing videos. For years, I’ve run around taking pictures,” said Barros. “I think this is a step forward.”

Here’s a look at the company’s Kickstarter video: