Jim Cramer has a love affair with Seattle. Well, at least some of the companies here.

As we’ve noted in the past, the brash and bold-talking stock picker has gushed over both Zulily and Zillow in recent months.

Now, the outrageous and off-the-wall TV host is on tap to broadcast a special version of his “Mad Money with Jim Cramer” show today from Seattle’s McCaw Hall. The show will follow the Starbucks annual meeting with Cramer talking to coffee czar Howard Schultz, reports The Puget Sound Business Journal.

The Starbucks annual meeting kicks off at 10 a.m., and it can be watched here via a live Webcast. 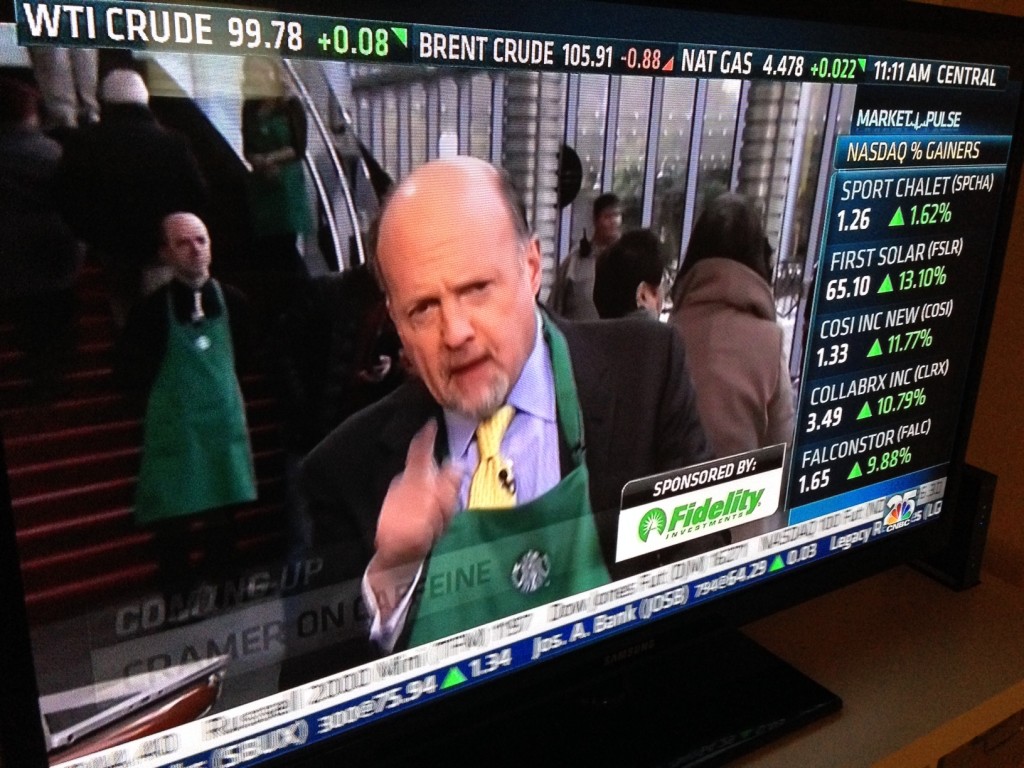 Other companies on Cramer’s radar include Zulily, Amazon.com, Costco, Paccar, Seattle Genetics and Nordstrom. Wearing a green Starbucks apron this morning, a caffeine-fueled Cramer was having some fun in coffee land.

“This is the real thing,” said Cramer from the Starbucks’ annual meeting. “I’ve got to tell you, there’s nothing like being out here.”

Starting at 3 p.m., Cramer will be hosting a number of executives from Seattle companies on “Mad Money,” including Blake Nordstrom of Nordstrom; Spencer Rascoff of Zillow; and Clay Siegall of Seattle Genetics.

Cramer calls Starbucks a “a stealth technology play,” something we’ve been noting as well. In fact, Schultz is making it happen.

“We have been, and we always will be a coffee company,” said Schultz in remarks to Cramer this morning. “But the question that any consumer brand must answer today is: How do you become relevant, not only inside the four walls of your stores, but on digital, mobile, loyalty and card. We have a big lead and that lead has given us permission to play outside of our stores.”

Cramer has been Tweeting up a storm since his arrival, including some pretty funny back-and-forth with Seattle Seahawk Richard Sherman.