It was a pretty typical Monday night at my place — that is, until Thad Lyman showed up at our front door.

You see, Lyman is the executive chef at two highly-rated restaurants in Gig Harbor, Wash. One has 4.5 stars on Yelp and cooks a wicked Boeuf Bourguignon. The other makes cinnamon rolls with bacon — ’nuff said.

So why the heck did Lyman jump in his pickup truck, drive 80 minutes north up Interstate-5, sit in rush hour traffic, and eventually arrive at my house on Monday?

To cook a three course meal for my roommates and I, of course.

We had a chance to test out Kitchensurfing, a New York-based startup that matches professional chefs with people wanting to enjoy dinner cooked by an expert inside their own kitchen.

The 28-person company, which has raised $18.7 million since debuting in 2012, is launching in Seattle today for those interested in eating incredible grub at your dining table and not having to worry about cooking or cleaning.

At first glance, Kitchensurfing seems odd — doesn’t a chef like Lyman need his own kitchen? Is he going to use my utensils? Won’t it be weird having a total stranger cook a meal inside the house?

But by 8:30 p.m. yesterday evening, the big smiles and satisfied tastebuds said it all — our inaugural Kitchensurfing experience was freakin’ awesome.

The entire process started days earlier on the Internet. I wanted to try Kitchensurfing out and used its website to request a chef on Monday evening for six people. Soon later I got a message from Lyman with a menu that he proposed. My mouth began watering after reading only a few lines: 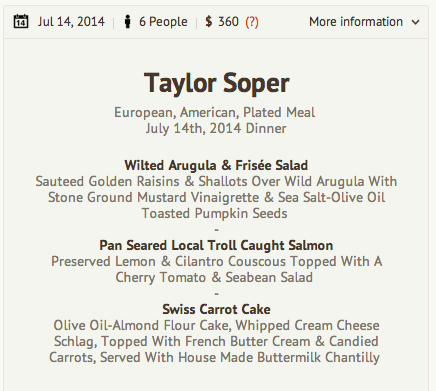 After Lyman and I exchanged a few more messages via Kitchensurfing’s web platform — he wanted to know about my kitchen, whether I needed silverware and plates, etc. — we were lined up for a 7:30 p.m. dinner.

Lyman arrived at about 6:30 p.m. and unloaded his truck. Kitchensurfing chefs are expected to provide their own equipment and supplies. Here’s how everything looked before Lyman began cooking: 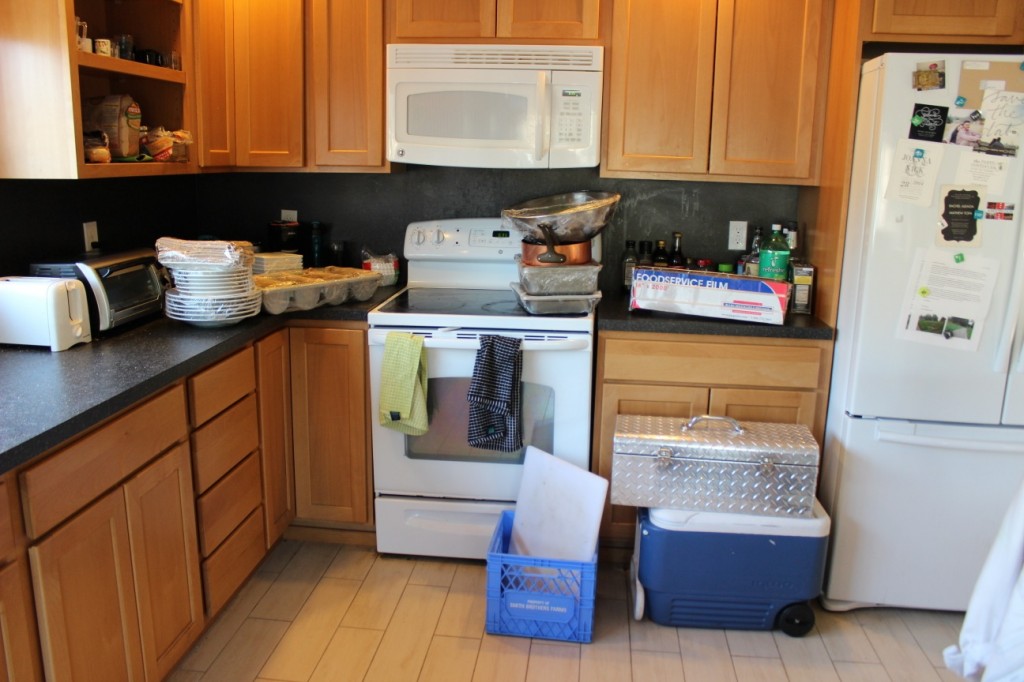 It was a little awkward in the beginning because none of us, all just two years out of college, had ever hired a private chef to cook a meal at home. Those doubts we had earlier crept back for a bit.

We started chatting up Lyman after a few minutes, though, as we drank a little wine and played cards. The Montana native told us a bit about himself and how he found Kitchensurfing, which is already operating in seven other cities. 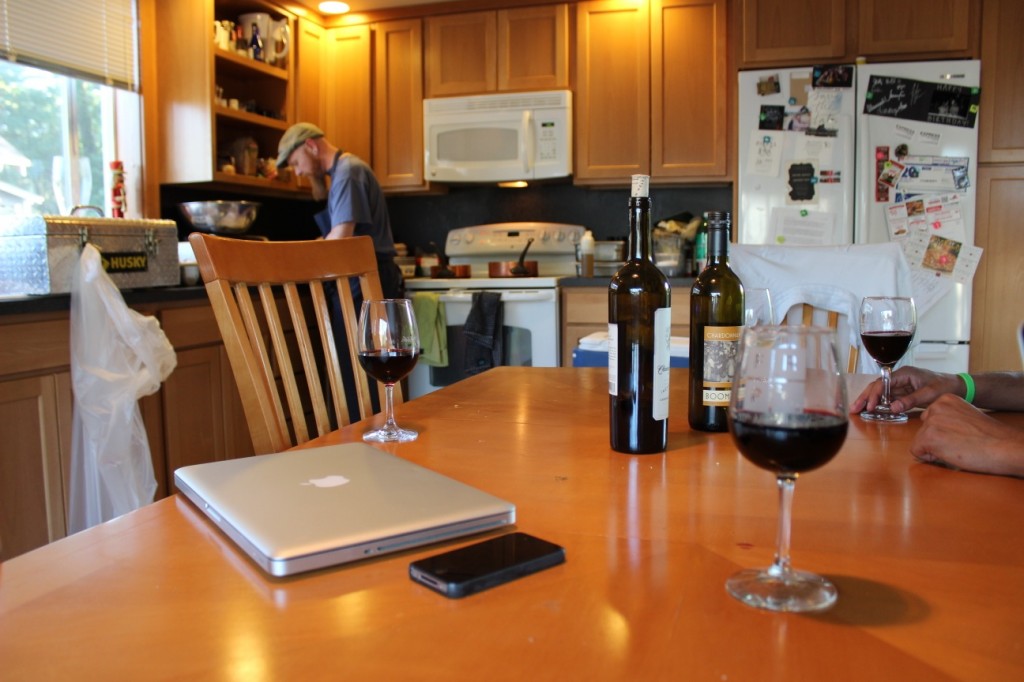 “It’s fun, and it’s marketing,” he said. “Anybody that can afford to have me come to their house and cook, can afford to come to my restaurant. I get to hopefully give them a memorable experience they can talk about for a while, and when they think about the next time they want to have a special occasion, maybe they’ll think of me.”

Lyman wondered how we found Kitchensurfing as well, and I explained how I was writing about the service and treating my roommates as a result.

“So who’s doing his laundry for the next week?” quipped Lyman. I liked him already.

Our first dish was a wilted arugula and frisée salad that had a nice mustard vinaigrette and several plump golden raisins. The fresh arugula and tasty dressing made for a pleasant start to the meal. 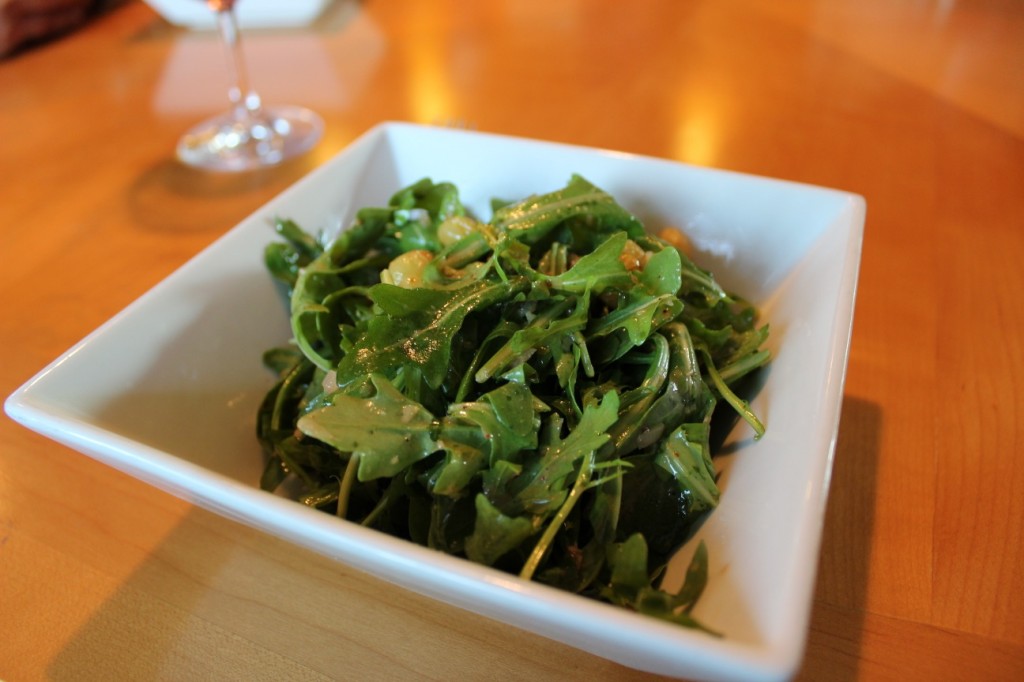 But our main dish was on another level. Being a nosy reporter, I started hovering over the chef as he prepared these bright orange slabs of salmon: 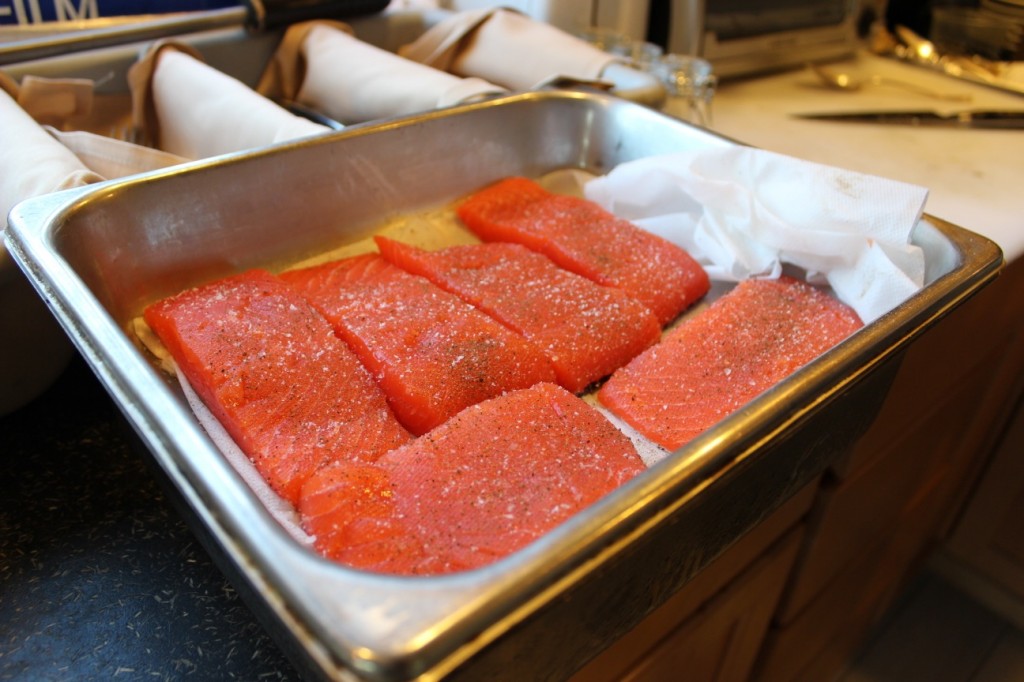 This was one of my favorite parts of the experience: We were free to watch Lyman in his element and learn how he was preparing our food. He said that the fish we were about to eat had been caught that morning. 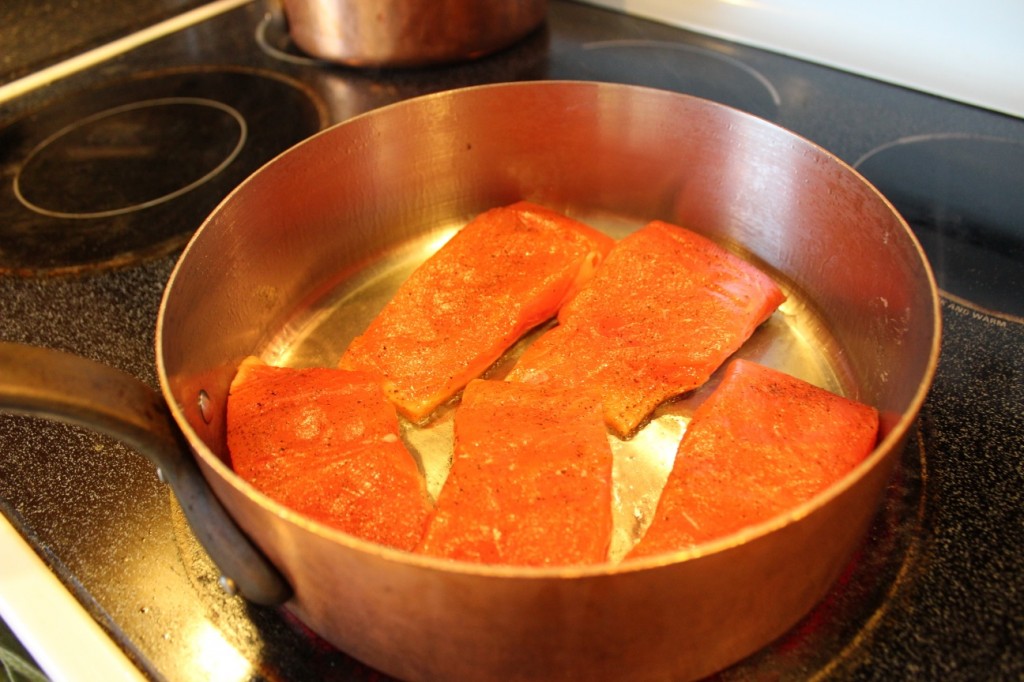 Lyman’s cooking process was fun to watch. He first pan-fried the salmon to give it “some color,” and after a few minutes, he moved the pieces of fish into the oven.

Meanwhile, he took the salmon skin and began frying it in a pan with oil.

“I’ll use these in the seabean salad,” the chef noted. “They’re like potato chips from the sea.”

During this entire time, we talked amongst each other as if it was any other night at home together, which made for an extremely relaxed atmosphere. Every so often Lyman would chime in with a funny comment, which was nice — I could see the experience being lackluster with a not-so-fun chef.

Thankfully, we liked interacting with Lyman, learning about his decades of culinary experience and asking him which wine we should pair with the salmon.

And oh boy, the salmon. 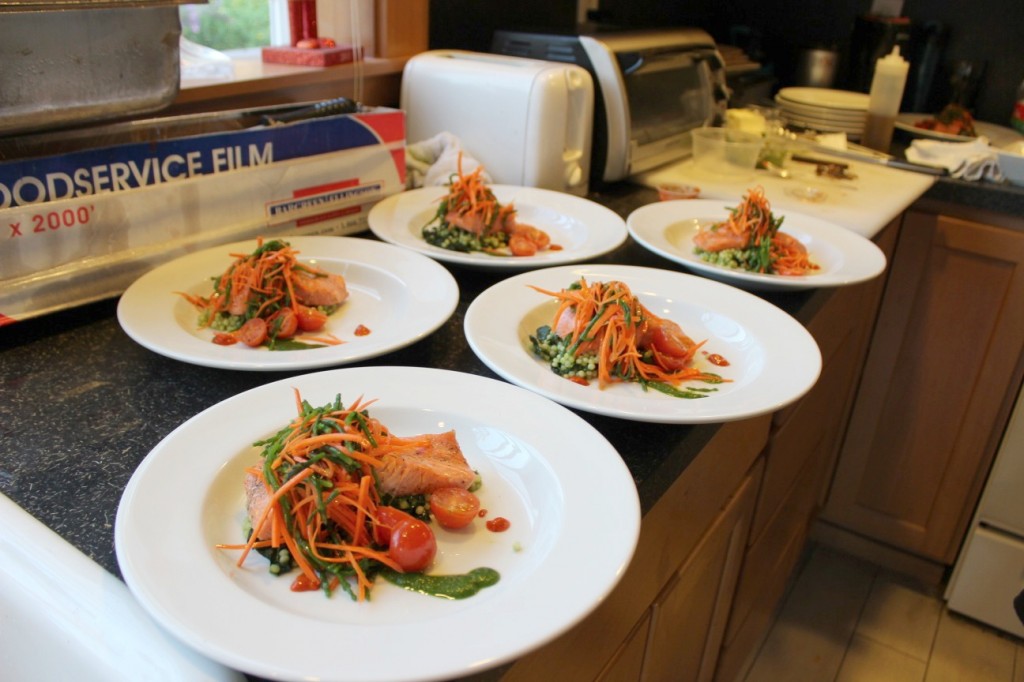 Did I mention the salmon? 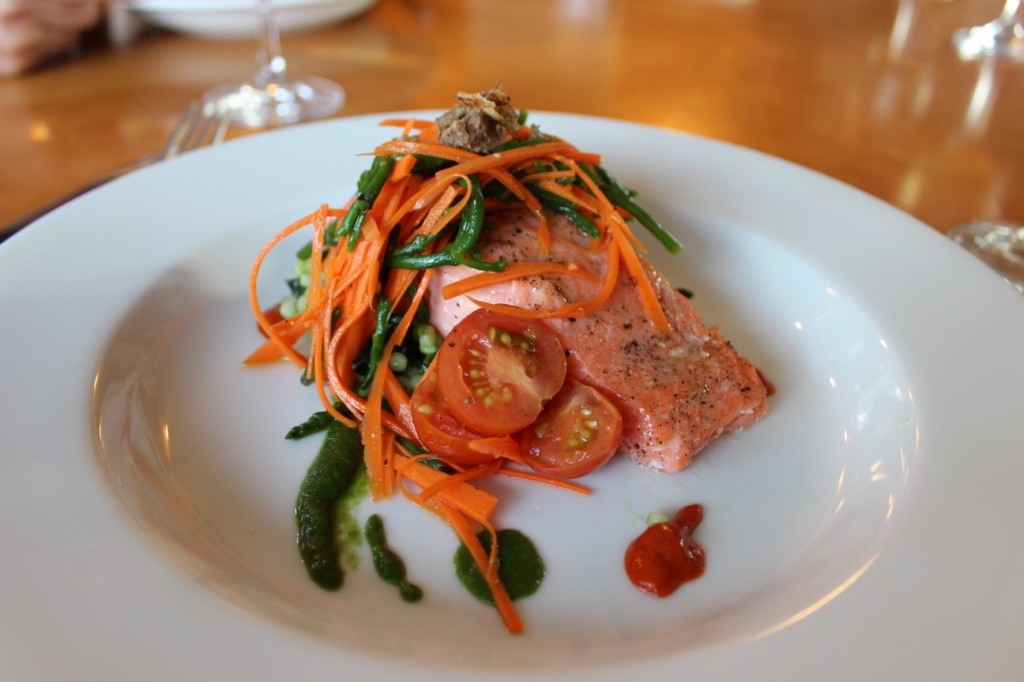 The freshly-caught fish from nearby Neah Bay was some of the best salmon I’ve ever had, and the roommates agreed. Lyman’s colorful presentation, as you can see above, was also excellent — the cherry tomatoes and seabean salad made for the perfect pairing. Even the hot sauce, made from candied jalapeno peppers, was like Sriracha but better — which is saying something for a guy of Asian descent like me.

This dish screamed “fresh,” and certainly did not disappoint. Soon enough, all six of our plates were essentially spotless. As my great-grandmother would say, we were all proud members of the “Clean Plate Club.”

But, much to our delight, there was still one more course to go. 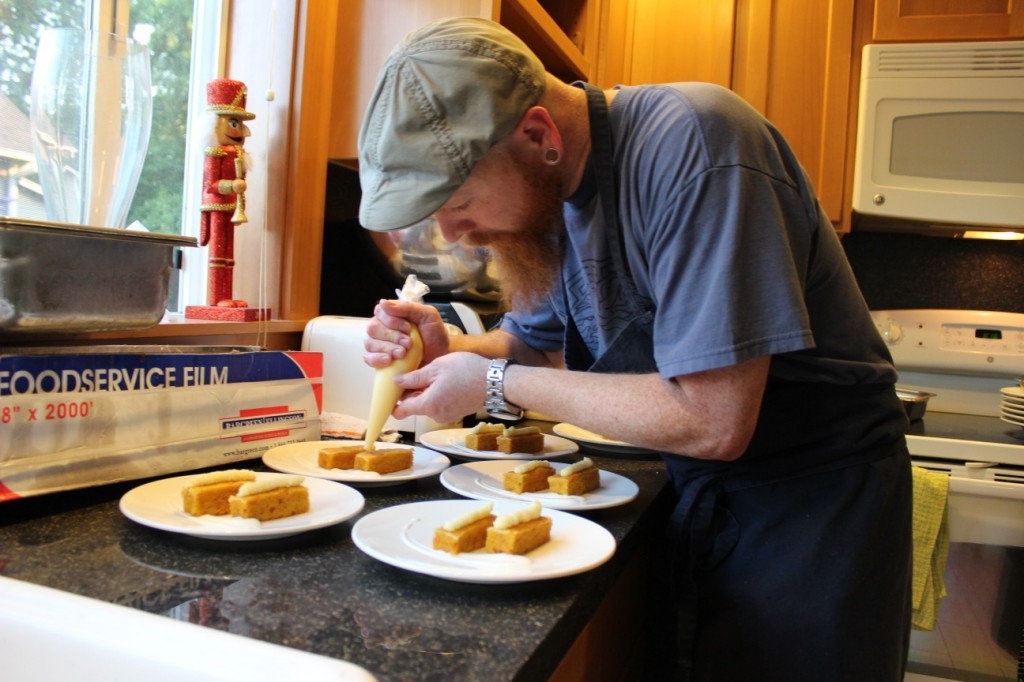 Lyman topped off the meal with a soft Swiss carrot cake that had a whipped cream cheese schlag drizzled all over, along with French butter cream and candied carrots.

“I poached those in syrup for 10 minutes and let them dry out for 2-to-3 hours,” Lyman said, educating us about his candied carrots. 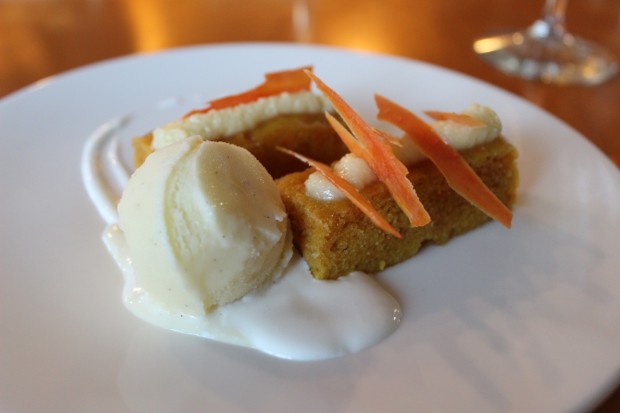 We were impressed, and so much so that one person started licking his plate.

“Is it a compliment when people lick their plate in front of you?” my friend asked Lyman.

“Yeah — I encourage it,” he responded.

After the third round of plates was wiped clean — literally — one of my roommates said this experience was comparable to meals we’ve eaten during the Seattle Restaurant Week.

“This is restaurant quality service,” he said, also noting how nice it was that Lyman cleaned everything, too.

Most of us agreed that we’d try Kitchensurfing again, but only for special occasions due to the high price ($144 and $216 for ingredients, plus a $10 service fee). Yet for those that are willing to spend anywhere from $30 to $200 per person for an awesome meal, it’s tough to go wrong with this new service.

Kitchensurfing, which has served up more than 100,000 meals now, thinks there are a lot of these types of people in Seattle.

“Seattle was a natural choice for the next Kitchensurfing market, being a growing tech hub in the U.S. as well as home to a blossoming food and restaurant scene,” founder Chris Muscarella told GeekWire. “Kitchensurfing merges the food and tech worlds together, by inviting Seattleites to explore the world of food through its dedicated online marketplace of local chefs.”

Muscarella added that Kitchensurfing is certainly in a crowded intersection between food and tech, with countless other companies figuring out new ways to feed people. But he noted how the startup occupies a unique space.

Our first Kitchensurfing experience was A-plus. The company’s online tools were easy to use and made planning the event a breeze. The food was healthy and fresh, while tasting impeccable at the same time. 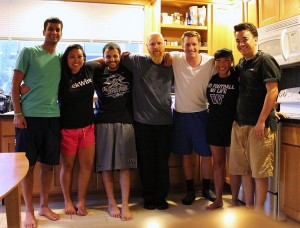 But my favorite part of Kitchensurfing may have been watching a chef make magic in the kitchen — and not just any kitchen, but my kitchen. It’s impressive, if anything, to see a cook make do with your space and produce a restaurant-quality meal.

And it seemed Lyman had a good time, too. He even gave us each a small sample of his house-made tomato jam to use for later.

Toward the end of our meal, the 25-year veteran culinary expert began explaining why he cooks for a living.

“Normal people that count how much money they make by the hour wouldn’t understand it,” Lyman said. “But at the end of day, it just makes you happy.”

It was nice knowing that Thad was happy cooking for us — we were certainly ecstatic while eating. Check out Kitchensurfing here.