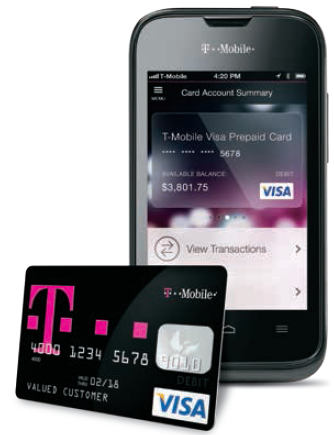 T-Mobile US is already well on its way with a plan to shake up the wireless industry. Now the company wants to disrupt again, albeit in a much different arena.

The Bellevue-based wireless carrier on Tuesday night introduced Mobile Money, a free way for its customers to keep money in a checking account, pay bills with their phone and avoid ATM fees with a Visa-backed debit card.

Here’s how it works: Starting today, those with a T-Mobile phone number can go to a T-Mobile store and open a new checking account for free. They’ll receive a reloadable Visa card that can be used at 42,000 ATMs across the U.S. to withdraw money from.

From there, customers can deposit cash at any T-Mobile location, in addition to other retailers and Safeway stores (coming next month). Checks can be deposited by taking a photo of the check itself and uploading it via T-Mobile’s Mobile Money app.

You can also transfer money to other Mobile Money customers using their phone number and last four digits on their Visa card. T-Mobile also lets you pay bills with Mobile Money.

“Millions of Americans pay outrageous fees to check cashers, payday lenders and other predatory businesses – just for the right to use their own money,” T-Mobile CEO John Legere said in a press release. “Mobile Money shifts the balance of power for T-Mobile customers and keeps more money in their pockets.”

T-Mobile clearly does not offer as many financial options at traditional walk-in banks, and it certainly isn’t the first wireless service to make something like this available. The company is also already apart of the ISIS mobile wallet consortium with AT&T and Verizon.

Nonetheless, it’s an interesting strategic movie from the nation’s fourth-largest wireless carrier — one that the company does not expect to make money on, but rather attract more T-Mobile wireless customers for long periods of time.

Mobile Money is the latest substantial announcement from T-Mobile, which has made a flurry of moves lately, led by the outspoken Legere. There are nearly 70 million U.S. adults who don’t have a normal checking account, so T-Mobile seems to have at least a few potential customers out there.