Each fall, for many years, Microsoft employees have bundled up and made the trek to Seattle’s Safeco Field to listen as top executives attempted to inspire them with a vision for the company’s future.

Satya Nadella is replacing that tradition with a new one: Under sunny summer skies in Redmond on Tuesday morning, the new Microsoft CEO cranked a siren to start a 38.5-hour hackathon — bringing together more than 10,000 employees from across the company to work on a wide variety of projects.

“This is really new,” Nadella said during his remarks to employees as the event began. “This is a new approach, a new idea, a new day for us.”

Apart from the potential to generate new products and features, the event is a chance for Nadella to focus employees on the future following a difficult couple of weeks — including the largest layoffs in Microsoft’s history. The job cuts are part of a broader push by Nadella to streamline Microsoft’s product development, and change its culture.

At the hackathon this morning, Nadella encouraged employees to take a hard look at existing Microsoft products such as Windows, Office and Bing, to get a sense for how flexible the code could be.

“I want you to push the core of our code bases,” he said. “Each of us has the five hacks that we would love to do on the products that we love to use and criticize. This is the time to stop the criticism and do something about it.”

In advance of the hackathon, employees signed up for projects on an internal site, based on ideas posted by team leaders. 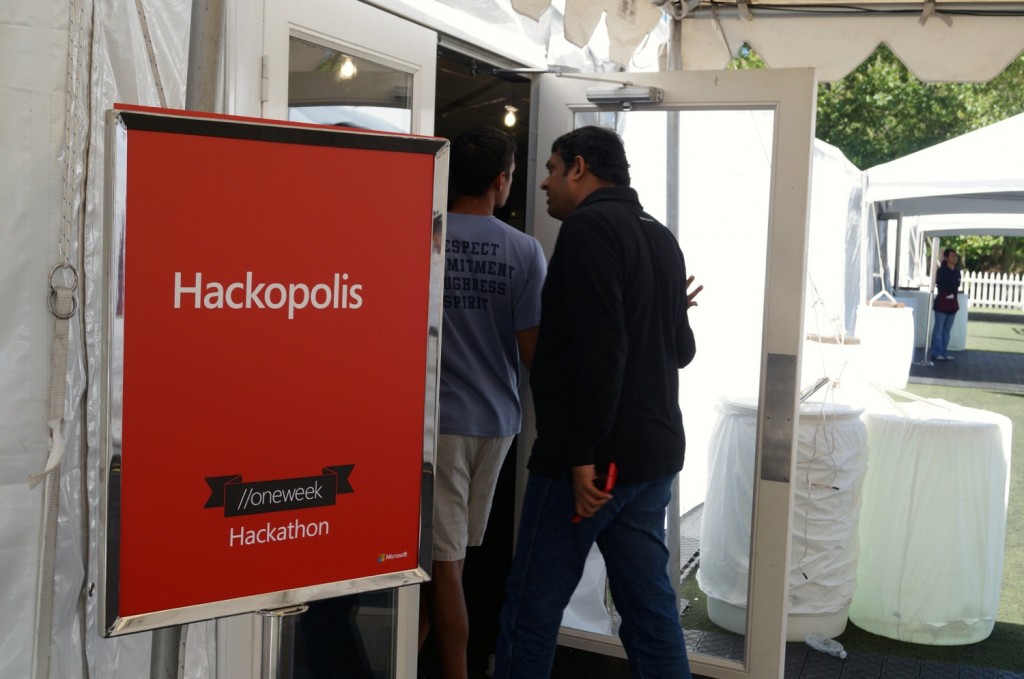 After listening to Nadella’s opening remarks, the teams in Redmond huddled at tables in tents the size of small buildings, typing on notebooks and sketching out their plans on white boards.

At one side of the makeshift village, the company brought in food and refreshments. In a nearby tent, cots were ready for employees who want to stay overnight. A sunrise yoga session is scheduled for Wednesday morning to help the teams clear their heads before the final push.

Some of the projects focus on technology for social good, such as one called “Data Is My Superhero,” which is using Microsoft Excel business-intelligence tools to create new ways for relief agencies and other groups to process and analyze data during and after natural disasters.

Harmony Mabrey, operations manager for Microsoft’s Disaster Response team, was looking forward to seeing data analysts and business-intelligence experts from other areas of the company tackle the challenge.

“We do a lot of external hackathons, so it’s really exciting to see it come from within the company, and get to leverage some skill sets of people I wouldn’t normally get to utilize day-to-day,” she said. 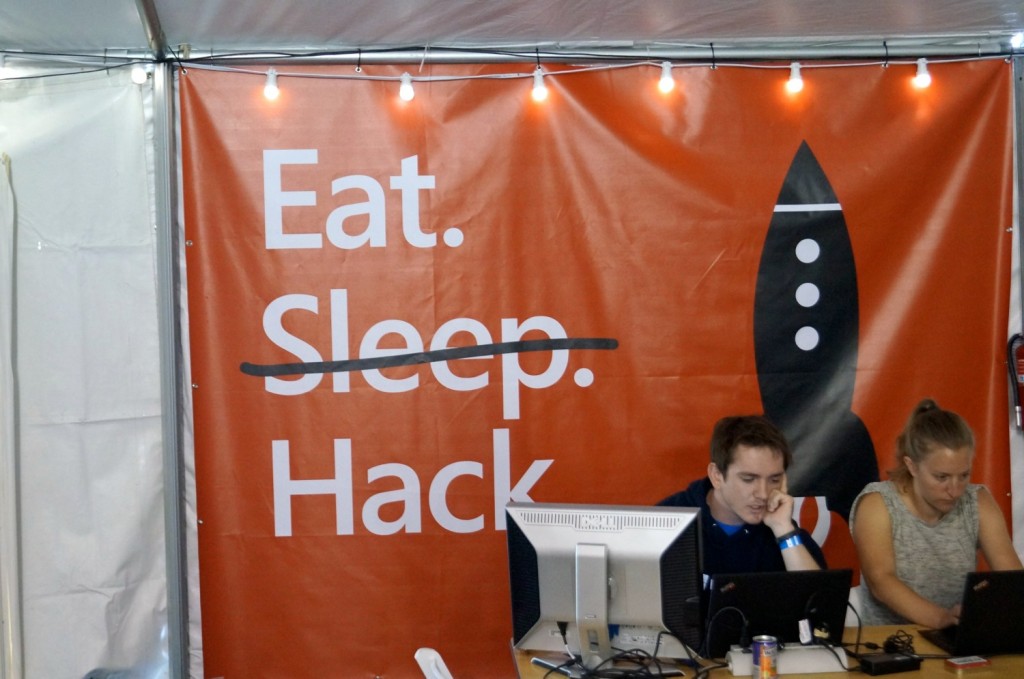 In addition to the teams in Redmond, employees from around the world are taking part in the event. In some cases, hackathon teams are distributed between Redmond and other parts of the country.

That’s the case with a project called “Digi Graffiti,” an augmented reality app that will let people use a phone as a “virtual spray can,” leaving digital messages, clues and icons on real-world landmarks, for their friends and followers to see in their phones. The team is split between Redmond and the Bay Area, coming from a variety of product groups and Microsoft teams.

“The project is a mix of different people who have expertise in different areas, as well as this passion to create something that’s very cool,” said Melroy D’Souza, a Bing user experience research lead.

Toward the end of the hackathon, Microsoft plans to bring in a series of customers — ranging from families to enterprise customers — for the teams to get a reality check on what they’ve been developing. This is part of Nadella’s push to make the company more responsive to customers, and faster to market. 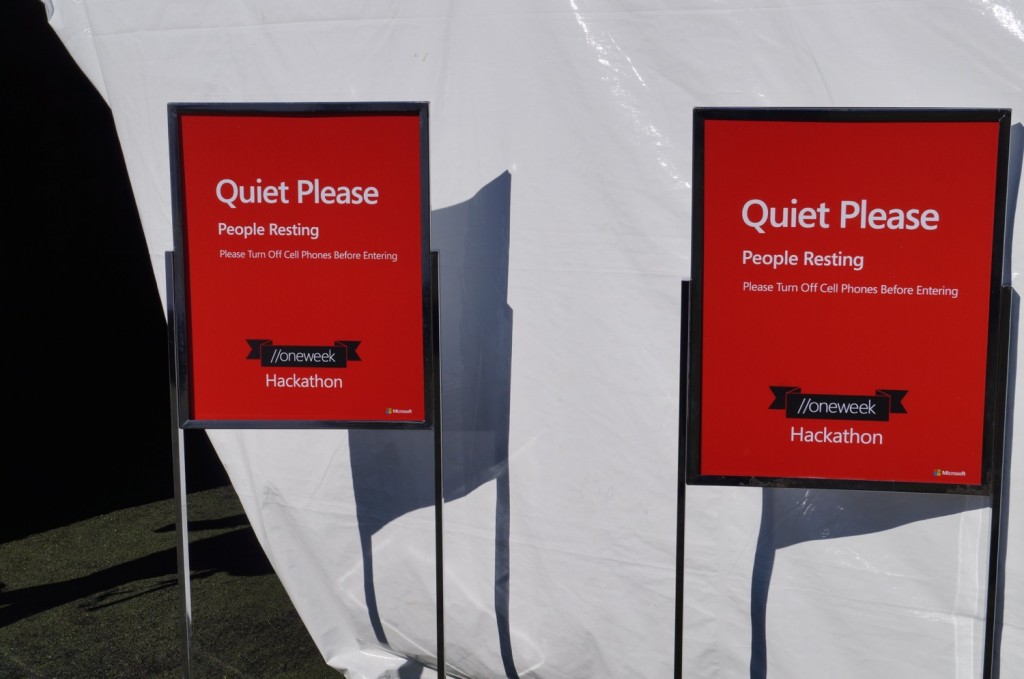 Microsoft general manager Tracey Trewin, a longtime engineering leader at the company, recalled talking with Nadella more than a decade ago, when they both worked on the company’s BCentral small business portal, about his desire to see people take more risks and build new things.

“This is a real reflection of him,” she said of the hackathon. “He’s very entrepreneurial.”

Trewin’s hackathon team is working on a project for recording and sharing family memories across generations. Talking about the project, Trewin spoke optimistically about Microsoft’s future.

“This is something Microsoft is uniquely positioned to do,” she said. “People are going to trust their memories with you, and Microsoft is more than likely going to be around past all of us.” 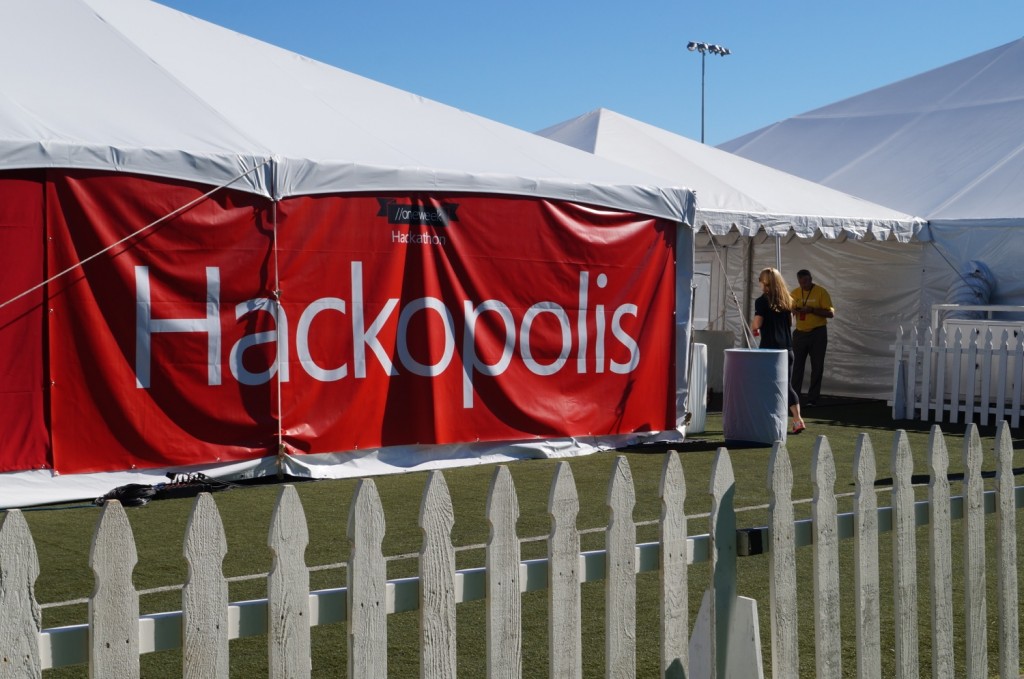 Scott Pitasky, Microsoft’s vice president of talent, is participating in two hackathon teams — one in China that’s focusing on Microsoft’s employee referral process, and another in Redmond looking at the way employees find new opportunities across the company.

“In almost all of the hacks, it’s people from different teams and different businesses, sometimes different geographies,” he said. “It’s kind of cool to get those different perspectives together.”

After the hackathon, Microsoft employees will vote internally on projects, with the best going to the company’s senior leadership team for review, and the winning team ultimately getting to spend an hour or more with Nadella to talk about their project and its potential future at the company.

So what project would Nadella himself work on? He told employees that he’d love to see someone come up with new options for the “Click to Note” feature on Microsoft’s Surface Pro 3 tablet, making it possible to do more than just open a quick note in OneNote when clicking the Surface Pro pen.