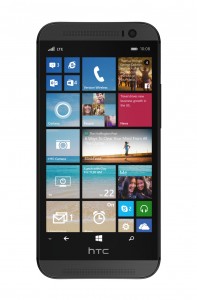 People interested in becoming Windows Phone users may soon have another handset to choose from.

A picture of what looks to be the HTC One M8 running Windows Phone 8.1 has appeared on Verizon’s website. The image, first spotted by PC Magazine, seems to indicate that the Taiwan-based mobile phone maker will be releasing a version of its flagship Android phone as a device that runs Microsoft’s mobile operating system.

The device’s specifications and launch date are unknown, though there have been some rumors floating around about HTC creating a lower-cost, all-plastic version of the One M8 to reach consumers who don’t have the deep pockets to afford a flagship price tag.

The One M8 has received very positive reviews from the tech press, and a version of the handset running Microsoft’s mobile operating system could prove to be a draw for some people interested in trying out Windows Phone.

What’s more, HTC has a good reason to start looking outside Android for more sources of revenue. The smartphone maker has hemorrhaged market share while Samsung has taken over as the leading provider of Android devices. Windows Phone isn’t anywhere near as big a market as Android is right now, but this handset could give HTC a chance to be a big fish among Windows Phone OEMs.

What do you think: is a Windows Phone-enabled One M8 enough to interest you in Microsoft’s mobile OS, or is it too little, too late?

HTC did not respond to a request for comment on this piece.