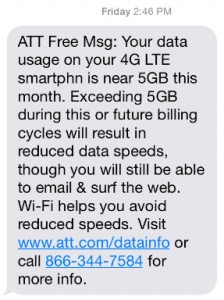 There’s a great debate that occasionally rages here in the GeekWire offices.

GeekWire co-founder Todd Bishop dumped his unlimited data plan with AT&T in 2012, and has preceded to flog me both privately and publicly ever since.

I’ve stuck with the higher cost “unlimited” data plan with AT&T — in part because I’m lazy about switching but also because I don’t like the mental weight of having to think about my data usage each month.

At least, that’s what I thought.

Last Friday, I received a text message from AT&T noting that usage on my phone was nearing the 5GB cap for the month of May.

That was the first I’d heard of this limit in my many years with AT&T.

I called AT&T and a very nice customer service rep explained what was going on.

“You do have unlimited data on the phone. It is just that streaming would be slower” after hitting the cap, she said, noting that sites such as Pandora and YouTube may be impacted by the slower speeds. 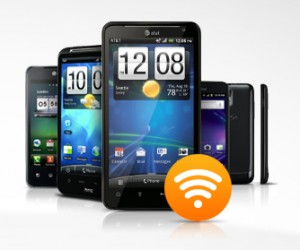 Then she added the kicker when I pressed about what unlimited actually means. “We do guarantee the unlimited, we don’t guarantee the speeds,” she said.

Turns out AT&T instituted these changes way back in 2011 — and I simply missed the communications and must have never exceeded my limit. (As you can tell, I’m also not a particularly solid reader of the fine print).

The customer service rep assured me that my bill would not be increasing if I topped 5GB, and she pointed out that I could reduce my data consumption by switching my phone to the Wi-Fi network at home and office.

I’ve already altered my behavior on that front, instituting the Wi-Fi capability at home.

Nonetheless, I am not too wild about the idea that I’ll be kicked down to a lower tier if I happen to exceed my limit for the month.

After all, I was operating under the assumption that I was paying for an unlimited plan on the best network. Is this new infortmation enough to get me to switch to a tiered plan?

Maybe. It depends if I exceed the 5GB limit in future months. One thing is for sure: I don’t like wasting brain cells worrying where I stand with my data plan.

What does Todd Bishop have to say to me about all of this?

“Once again, I’ve been vindicated,” he says.