Seattle’s Central District isn’t exactly known as one of the city’s innovation hubs. For 54 hours this past weekend, though, it certainly seemed like it.

More than 100 people — and 40 high school students — participated in Hack the Central District, a Startup Weekend event at Garfield High School that included many folks from Seattle’s African American community. This was the first ever Startup Weekend held in the Central District, or as co-organizer David Harris referenced last week, “Africatown.”

“The community is lacking this,” said Ralph Redmond, a 16-year-old junior at Garfield. “This was right down the street from my house, and I was very fortunate to be able to just pop in.”

The hackathon was designed to bring together technologists, entrepreneurs, makers and local leaders to better position the Central District as a place that provides an environment for young people to learn about innovation and improve their community through technology.

On Sunday, ten groups pitched for five minutes each. Ideas ranged from first-place Politicheck, a service that compares politician campaign promises to their track records in office, to Black Rogue, an apparel company started by a former homeless teenager that gives part of its revenue to Seattle’s homeless shelters. Others included Sho’betta, a platform for financial literacy and community-based crowd lending for minority-owned businesses, and Africatown, an online hub that provides opportunity for people to connect with cultural experiences.

“I was very impressed at the innovative ideas of the participants,” said EDEN BodyWorks founder Jasmine Lawrence, who helped judged the pitches. “I saw that they were very passionate about what their businesses could do to help people in their community and not just about making money.”

Nearly all the pitches shared that common theme of helping the community where the participants live in.

“This was really meaningful to me,” said Briaan Barron. “My family has lived in the Central District for decades and created a legacy here — but so much of that was grassroots and word of mouth. Being able to learn how to translate that into the digital age is super important to me and it’s something I’ll take back to the older generation.”

Harris said his expectations for the event were “blown away,” and noted that he was impressed with the informal connections being made.

“Outside of working on their projects, folks were talking about life and the inner generational bridges were being built,” he said. “That was the most exciting part to see.”

The City of Seattle helped sponsor the hackathon. Rebecca Lovell, Startup Liaison at the City who co-organized Hack the Central District, said that the event was a key milestone coming out of more than five months of work to connect the African American youth community to opportunities in tech entrepreneurship. Prior to this weekend, the City helped sponsor the attendance of African American students at the UW Startup Weekend and held coding bootcamps for students of color over the summer.

Yonas Berhe, a recent graduate from Franklin High and CEO of his own startup, also noted the accessibility aspect.

“No one here knows about the David Karp’s, the Mark Zuckerberg’s, the Steve Jobs, the Wozniak’s,” he said. “The reason those guys got that far is because they thought they could go that far. Once you remove the mental barrier, you will see a lot of people exceeding and reaching high.” 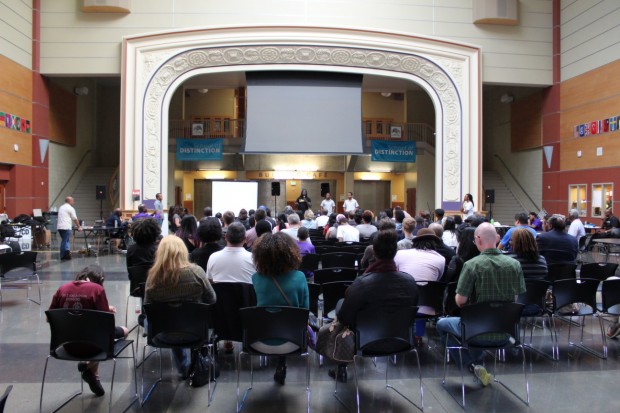 Removing those barriers is no simple task, but the fact that Seattle is already a global entrepreneurial hub chalk full of successful companies is beneficial. Zithri Saleem, a co-organizer for the event and an award-winning STEM educator, explained how places like the Central District need a way to be as innovative and forward-thinking as the rest of Seattle’s tech community.

“Seattle is a capital for innovation, but somehow there’s a disconnect between what’s happening in the larger economic ecosystem in Seattle and what this community has historically experienced and is experiencing now,” he said.

Saleem thinks that Seattle, as a city, can do a better job of extending its hand and welcoming more people into the innovation and entrepreneurial spaces.

“This isn’t about altruism or charity,” he said. “This is about justice. This event creates a step for us to start to having those conversations and change our way as problem solvers to say, ‘what is the root problem and what are potential solutions?'”

Of course, this weekend’s event was a small step in the mission to expand opportunities in technology entrepreneurship for youth and communities not typically exposed to these types of ideas. Saleem and Harris both said that there needs to be a physical space in the Central District where the community can come together and talk about innovation around the clock.

“You think about what the future could be if these types of events and resources we had this weekend were always around,” Harris said. “What kind of things would continue to happen? What would people continue to come up with? That’s what I am excited about seeing at the community level.”