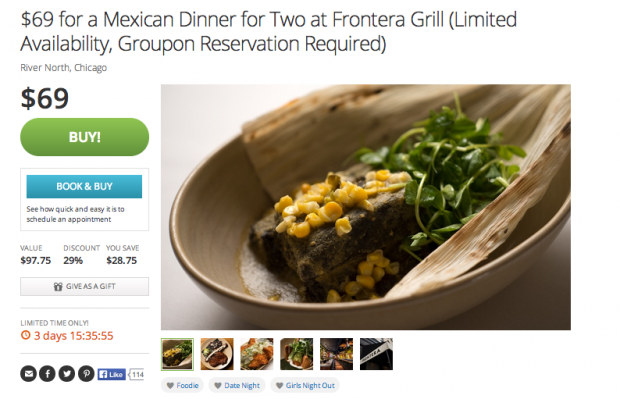 One of Groupon’s early goals was to help restaurants fill seats that would otherwise have gone empty, but that didn’t always pan out because customers were generally able to redeem their vouchers whenever they wanted.

Now Groupon is trying to fix that by introducing a new feature today called time-based deals, which allow business owners to take reservations or appointments as part of the promotion. Groupon has been testing the idea in a pilot program featuring about 100 restaurants, including a few in Seattle including Root Table and the Eva Restaurant.

Groupon has been struggling to achieve the same level of interest since the daily deals craze hit a few years ago. Since then, it has branched into selling just about anything, including clothing and other physical goods. This could provide an attractive upgrade to its original business since restaurants and other appointment-based businesses have long sought a way to be able to drive customers into their business during off-peak hours. 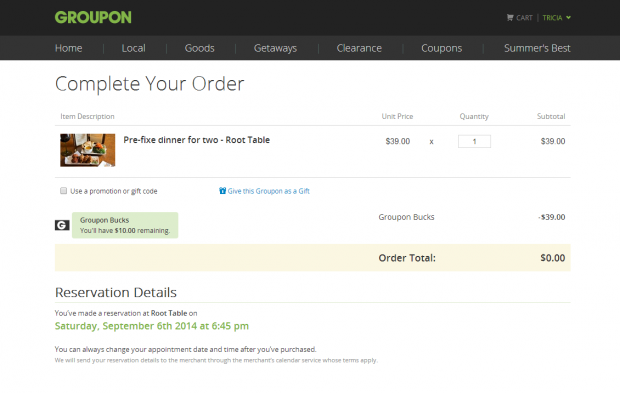 A restaurant sets up the offer on Groupon, which can work with the establishment’s existing reservations system. When a consumer buys the offer, he or she is prompted to say how many are in the party and what day and time they’d like to arrive. The restaurant is then notified of the booking.

The concept was inspired by Groupon’s past reservations experiences and the acquisition of Savored, a startup that was experimenting with offering discounts on your bill when you use it to book last-minute reservations at high-end restaurants.

When viewing the time-based deal at Root Table in Seattle, a Thai fusion restaurant in Ballard, it was offering three-course meal with two glasses of wine for two for $39, and there were more than a dozen times available on a Saturday night, so at least for now, the options seem pretty generous.

Another nice perk is that since the deal is booked in advance for a specific time, there is no longer a need to print out a coupon or show a mobile device — something some people prefer so that the other people in their party don’t get the impression they are cheap.

As with other promotions on its site, a portion of the revenue goes to the merchant and a portion of it goes to Groupon. Reservation and appointment deals will soon expand to other categories, including salons, spas, classes and activities.