Nick Denton is a controversial new media titan, uncovering the gossip that no one else in the news business will touch. The 47-year-old Gawker Media founder — whose online properties include Gizmodo, Deadspin, Kotaku and others — also knows how to build big audiences.

And now Denton has some advice for Amazon.com’s Jeff Bezos, who purchased The Washington Post last year for $250 million.

In a wide-ranging interview in Playboy, Denton points out that Bezos should ditch the print newspaper altogether and get readers switched to Kindles. He also thinks Bezos could smartly apply the company’s “recommendation engine” to the news.

The interesting move would be to see whether you could take an entire newspaper-reading population and wean them off print. The price of Kindles is coming down. How much would it cost to bundle a Kindle with your subscription to The Washington Post? Discontinue the print and, as a gift, give everybody a Washington Post reader that can also buy books for them. That’s what I’d do. That’s what Bezos would do if he were ballsy.

Having worked in the traditional newspaper world for many years, I agree with Denton’s bold suggestion. The print operations at many American newspapers are weighing down the ability for the organizations to innovate online, and that spiral needs to change if they are going to survive. 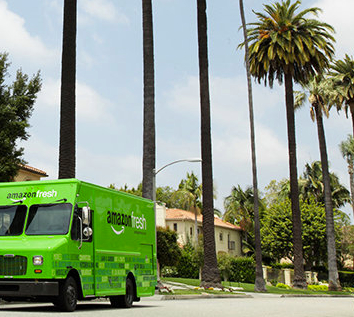 Of course, there’s one other potential theory for Bezos and The Washington Post, which may keep the print product alive. He could use The Washington Post’s fleet of trucks as a mechanism for delivering additional products, beyond the news. In Seattle, LA and San Francisco, Amazon.com continues to experiment with grocery delivery through its Amazon Fresh business.

Of course, there’s also Amazon Prime Air, which could drop off newspapers at your doorstop via unmanned aerial vehicles.

It’s unclear what direction Bezos plans to take his new media jewel, though reports surfaced earlier this month that the tech billionaire was consulting with Business Insider’s Henry Blodget to help transform the news operations. Bezos is an investor in Business Insider, which is known for its attention-grabbing headlines.

That’s also something that Denton knows well, since his properties have outed gay tech leaders and broken the news around things such as football star Brett Favre texting photos of his private parts to women.

Could Gawker one day end up in the hands of Bezos?

Denton doesn’t know Bezos personally, though tells Playboy that he actually had a dream that his media conglomerate was purchased by Bezos. Now, that would be something.