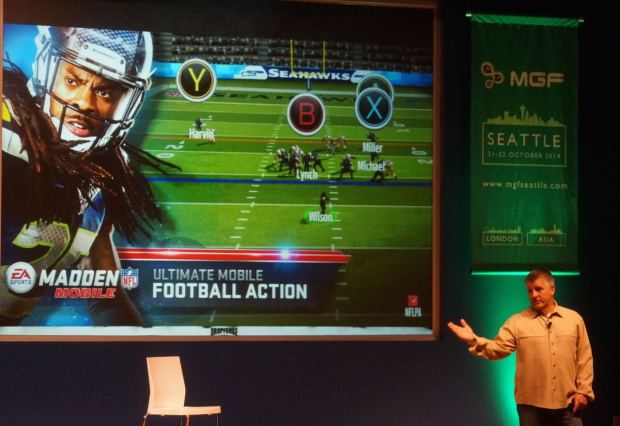 Speaking this morning at the Mobile Games Forum in Seattle, game industry veteran David Bluhm, currently the CEO of DropForge Games, concluded his talk with five predictions for the future of games. He was careful to point out that he could be completely wrong, but his predictions are good food for thought, and fodder for debate.

So here they are, his five (potentially off-base!) predictions.

Virtual-reality headsets. Bluhm isn’t sold on the potential for bulky headsets like Oculus VR to make a big impact in homes. “I think this stays in arcades and really confined spaces,” he said. “I’m not making big bets on it.”

Augmented reality experiences. In contrast, Bluhm said he sees big opportunity for fun social experiences that overlay data and visuals over the real world. He’s surprised that no one has come up with something in this area that has really taken off. “I think this is a lot of fun,” he said.

Gamification of health. Turning personal health into a game is another area where Bluhm sees big potential, despite his early skepticism. He cited “really brilliant things” that people are already doing, and saying he sees “a massive opportunity” in the future, catalyzed by initiatives including Apple’s HealthKit.

High-tech game parks: Bluhm sees opportunity for new types of outdoor (or indoor) parks that let people build drones and other machines for tactical advantage, and then match them up as part of elaborate and fun war games and other competitions. “I think there’s a lot of cool things that are going to happen” along these lines, he said.

Interactive NFL fan experiences Following the lead of NASCAR, Bluhm said he sees an opportunity for the NFL to let fans call their own plays, essentially second-guessing the coaches, and then see how their calls would have fared agains the plays the other team actually ran, using artificial intelligence. Basically a next-gen Madden experience. “In-game engagement of fans has got a long way to go, and now we’ve got a way,” he said.

Bluhm concluded by saying that he’s only sure about one thing: “This is just now getting interesting,” he said, “and we have a lot of innovation and a lot of opportunity to come.”