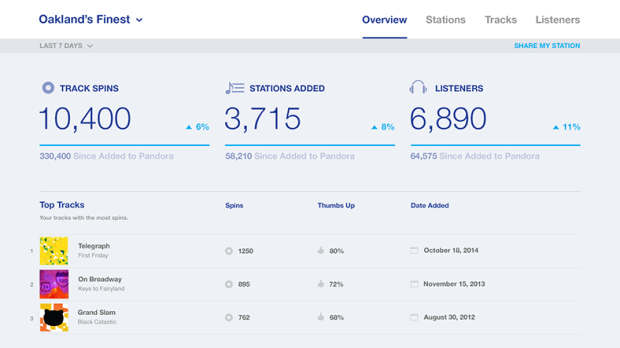 Pandora has started offering musicians more details about how users on its online radio service are interacting with the songs they play.

The company launched the Artist Marketing Platform (AMP) today, which will provide artists with more information than they’ve ever received about who likes their music. Musicians will see where people are listening to their music, as well as which tracks are getting the most play, and how many people have heard their songs in the past month.

To put the magnitude of the announcement in question, Pandora revealed that it has more than 125,000 individual artists with music on its service. Almost 12,000 of those have more than 100,000 unique fans on Pandora, which makes for a lot of music, and a lot of fans. Harnessing the company’s platform could be a boon for artists.

The online radio company is pitching the service as a way for artists to see what songs are catching the attention of listeners so that they can better figure out how to promote them in other media, or build set lists for an upcoming live show. Especially with more people listening to music online than ever, the new data stream could be a powerful tool for artists.

However, there’s also another angle to AMP: many musicians and labels feel like they’re not getting a big enough cut of Pandora’s profits from their music. By giving artists more detail about how often their songs are being listened to, the internet radio company might be able to avoid some criticism about its royalties.

Especially at a time when the music streaming space is heating up, getting on artists’ good side has the potential to pay off big time.