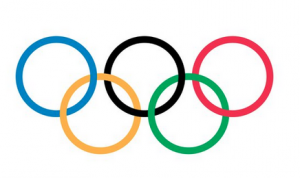 There’s a reason you won’t see any Instagram or Vine videos published on social media by Olympic athletes this month in Sochi.

The IOC does, however, let participants record video or audio for their own sake, but it must be done with non-professional recording material — no TV equipment, tripods or monopods are allowed.

These are just a few of the slightly-ridiculous social media rules the IOC has implemented for this year’s Games. While participants can’t share video or audio, they can post written content and photos of their Sochi experience. However, the IOC demands that it be in a “first-person, diary-type format,” so to “not assume the role of a journalist, reporter or any other media capacity, or disclose any information which is confidential or private in relation to any other person or organisation.” 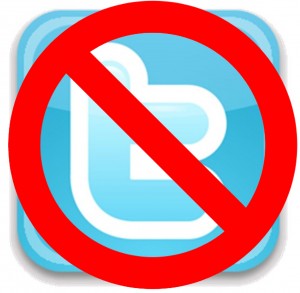 In addition, the posts and photos must always “conform to the Olympic spirit and fundamental principles of Olympism as contained in the Olympic Charter, be dignified and in good taste, and should not be discriminatory, offensive, hateful, defamatory or otherwise illegal and shall not contain vulgar or obscene words or images.” Also, if you take a photo of other people within the Olympic Village, the IOC says you must get their permission to post before sharing on the Internet.

So, basically, the IOC doesn’t want athletes talking smack about how bad the conditions are in Sochi. Also, it looks like athletes can’t write in the third-person. Alrighty.

There’s even more. Athletes that have sponsorships may not post about brands unless they have written approval from the IOC or their National Olympic Committtee. For example, Shaun White can’t post about Oakley or Burton unless he’s pre-approved such actions.

“Social media activity by Participants and Other Accredited Persons during the period of the Olympic Games should be undertaken for the purposes of sharing their experiences and communicating with their friends, family and supporters and not for commercial and/or advertising purposes,” the rules read.

Athletes are also banned from posting images of the Olympic rings and can only use the term “Olympic” in their posts, blogs and tweets for editorial or factual purposes — athletes cannot combine the word “Olympic” with an any third party or third party’s products or services. Athletes are also banned from using Olympic properties like emblems or mascots without written approval.

There are also a few odd restrictions for media. For example, media organizations are not allowed to create Olympic-related websites or social media accounts, but they can create “sub-folders” dedicated to the Olympics: 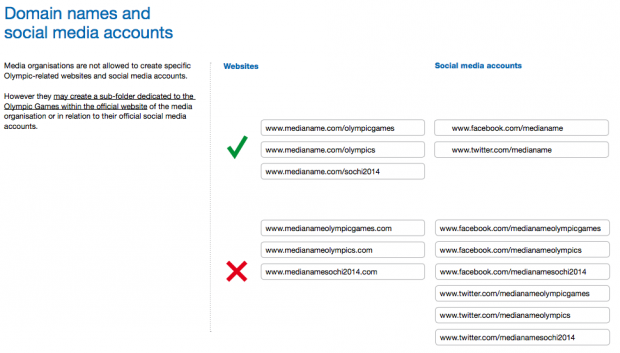 The IOC is also very specific with its restrictions on Olympic apps developed by media. The Olympic rings and emblem can’t be used on the app’s thumbnail or within the app itself, nor can the app name include the terms “Olympic, Olympics, Olympic Games or Olympiad.”