Foursquare has finally released a new app for Windows Phone, nine months after Microsoft invested in the New York-based startup. 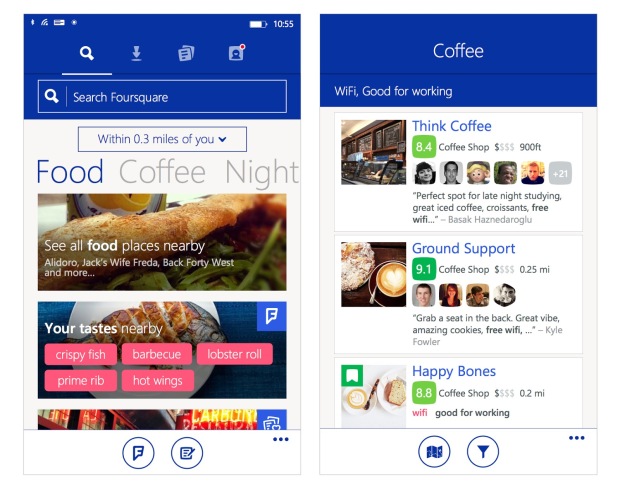 This summer, Foursquare split its original app into two: Swarm provided the classic check-in feature that consumers use to locate nearby friends, and now there’s Foursquare, which offers restaurant reviews and tips, much like Yelp or Urbanspoon.

With today’s launch Windows Phone now has both versions.

The Window’s Phone Foursquare app is free to install, and so far has received 2,345 reviews to give the app three out of five stars. Negative comments dock the app for being slow and for offering fewer features than apps on other platforms.

The Swarm app, which was last updated for Windows Phone a week ago, has 801 reviews and also receives a three-star rating.

Foursquare’s transformation was partly funded by Microsoft, which invested $15 million into the company in February. The investment was part of a a $35 million investment round the in December, which valued the company at $650 million. The two companies also agreed to a strategic partnership, which gave Microsoft access to Foursquare’s massive trove of locations and check-in information.

The big payoff from Microsoft’s investment in Foursquare is probably not for the consumer-facing apps — but the data. In July, Microsoft said Foursquare’s data started being integrated into Bing, with searchers seeing tips and recommendations from Foursquare in the sidebar.