The company announced the Nokia Lumia 930, its new flagship phone, as well as the Lumia 630 and 635, its new budget Windows Phone offerings. All three of the phones are slated to launch internationally later this year. I had a chance to get some hands-on time with the handsets, and here are my first impressions: 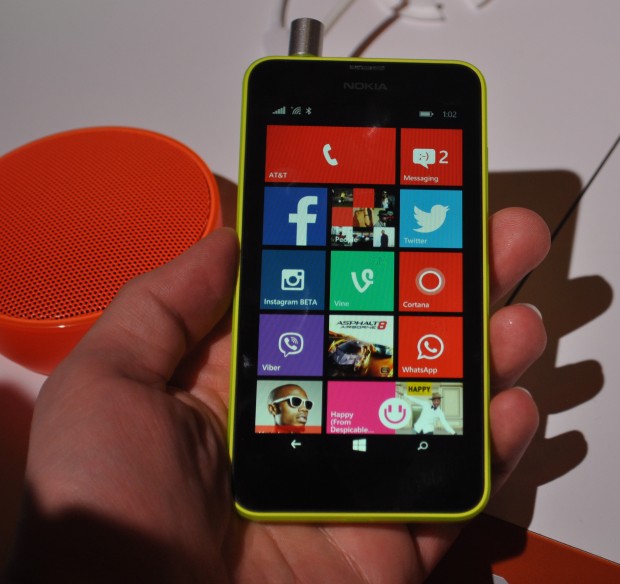 The 630 and 635 are Nokia’s new forays into the budget smartphone market. The 630, which comes in both single-SIM and dual-SIM 3G configurations, will retail without subsidies for $159 and $169, respectively, while the 635, which features a single 4G SIM, will retail for $189. They definitely don’t feel that cheap. The handsets feel solid when held (though a bit plastic-y), and I didn’t any sort of performance lag that would mark them as a lesser product.

The one major difference that the budget handsets have compared to Nokia’s flagship models is the lack of hardware search, back and home buttons on the face of the phone. Instead, the “buttons” are displayed at the bottom of the screen. The phones will begin a global rollout this May, starting in Asia, and then working its way around the globe to the U.S.

While the 630 and 635 don’t feel flimsy by any stretch of the imagination, the 930 still feels more solid. The device, which features a 5-inch screen, feels hefty, thanks in part to its metal body. It’s definitely on the larger side as far as phones go: I have a fairly sizeable pair of hands, but grasping the 930 on both sides with a single hand was about all I could hold. The phone boasts a number of interesting features, including a 20 megapixel camera and a quartet of microphones that can be set up to capture surround sound or be used to pick up sound in a particular directon. While the 630 and 635 feel good enough, the 930 is slick. It’s slated to roll out to Europe starting in June of this year for $599, and will then spread to much of the rest of the world. 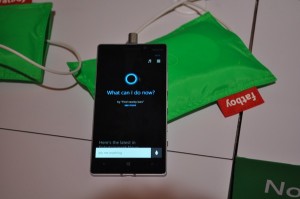 In the U.S., Nokia chief Stephen Elop said the company will be focused on the Lumia Icon, a phone that’s nearly identical to the 930, but engineered to run on Verizon’s network. The Icon is an exclusive to Verizon, and it’s unclear if the GSM-based 930 will make it stateside after Verizon’s exclusivity contract lapses. Still, if I had to trade in my iPhone for a phone on another platform, I’d definitely be interested in Nokia’s flagship offering. In my limited experience, it feels solid in the hand and runs like a charm.

Elop also announced the Nokia MD-12, a Bluetooth speaker designed to match the company’s colorful new vision for the Lumia line. In the crowded demo area, the awkwardly-named MD-12 put out decent enough sound, though it certainly didn’t seem like anything to phone home about. Still, it’s compact, fairly cheap at $55, and seems well-designed. I wouldn’t necessarily rush out to buy one, but it seems like an interesting little gizmo.

With the launch of Windows Phone 8.1, it’s going to be easier for developers to create apps for the new handsets. The new update will bring the Windows Runtime to smartphones, which means that developers can create a single core code base for PCs, tablets and phones all at once. Right now, there are 245,000 apps on the Windows Phone Store, and Elop said there are 500 more being added every day, but that’s still less than a quarter of all the apps available on iOS.