Facebook’s new office is booming in Seattle, so much so that it is now attracting the attention of the state’s top political leader. Gov. Jay Inslee popped by the company’s offices at the Metropolitan Park in downtown Seattle, telling engineers at the facility that he’s excited to have them in the state.

Facebook now employs nearly 400 people in the Seattle area, and we’ve heard rumblings that the company is eyeing an even bigger expansion here. Word is that Facebook, which expanded two years ago into the Metropolitan Park towers, is on the prowl for as much as 90,000 square feet in downtown Seattle, looking at two floors in the Macy’s building. That would be enough room for about 500 employees.

Reporters were not permitted to attend the event, but Gov. Inslee issued this statement about Facebook’s growth in the region.

“We’re home to some of the country’s top talent and it is encouraging to see tech companies growing and thriving here in Washington,” he said. “Seattle has become a global leader in the tech industry, due to our high quality of life and world-class workforce. Facebook is directly contributing to our economy and job market – their success is a success for all of Washington.” He also discussed issues tied to transportation and the environment, and even wrote on the company’s giant wall.” (See below).

Facebook is one of growing number of Silicon Valley companies that have established engineering outposts in Seattle in recent years, joining companies such as eBay, Twitter, Salesforce.com and Google. Stay tuned to GeekWire, as we’ll have word on yet another privately-held Silicon Valley storage company (one valued at more than $1 billion) that’s moving into the city. 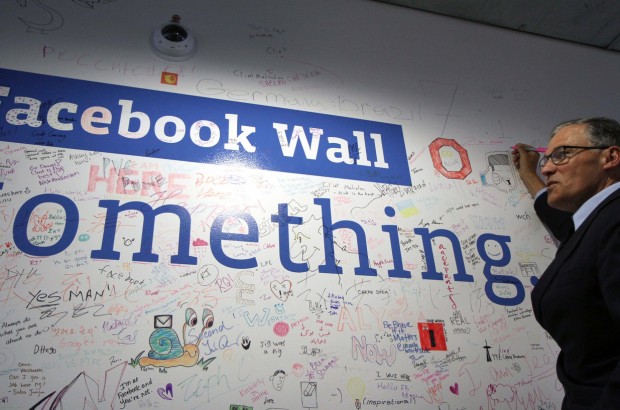