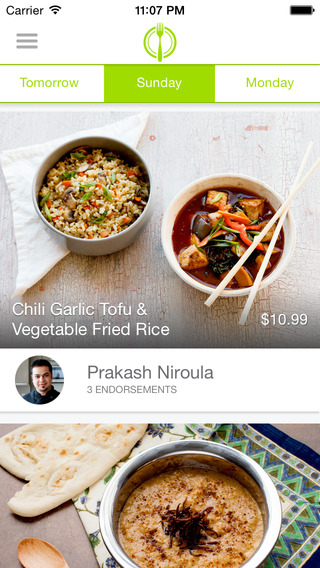 There’s something brewing at the intersection of food delivery and technology. In the past few years, we’ve seen several new startups help bring lunch and dinner to our doorsteps — and now there’s yet another company launching in Seattle doing the exact same thing.

Ex-Amazon product manager Aakhil Fardeen and his former colleagues today officially launched Lish, a startup that prepares on-demand meals priced at $12 or less and delivers them to customers’ houses and offices around town.

Fardeen started Lish after working long hours at past jobs and coming home wanting to eat a fresh meal, but feeling too worn out to cook.

With that problem in mind, Fardeen recruited five others to build a marketplace that connects professional chefs with busy people who may not have the time or skills to cook a quality meal.

Users can see what meals are available by using Lish’s app, which updates each day. If they see something tasty and it’s before 5 p.m., customers can order food and expect delivery (which costs $4) in less than two hours. They also have the option to order meals in advance.

Lish is somewhat unique in the food delivery space in that it does not hire its own chefs, nor does it deliver food made by other restaurants. The company allows chefs — who are not Lish employees — to make their meals either at Lish’s kitchen in Seattle or at their own restaurants.

“Lish is a meals marketplace where local chefs prepare authentic from-scratch meals that they are the best at making,” Fardeen explained. “Each chef decides their own menu, buys fresh ingredients and prepares the meals — things that they enjoy doing the most. Lish does the heavy lifting with technology, marketing and delivery.”

Lish has been bootstrapped so far, but Fardeen noted that the startup is raising a seed round — which is not surprising given where investors have been putting their money recently.

Just last week, we wrote about Peachd, another food delivery startup started by former Amazon employees that reeled in $2.7 million from some of Seattle’s top venture capital firms. Munchery, which has raised $32 million, is set to launch in Seattle this summer. There’s also Caviar, which has raised $15 million and could soon be acquired by Square for $100 million.

There are several others in Seattle’s food delivery space, from Eat24 to Bitesquad to Postmates. More could arrive from the Bay Area, where San Francisco-based startups like SpoonRocket and Sprig have already raised money from investors.

The big guys are also taking notice. Amazon already offers food delivery via its Amazon Fresh Seattle Spotlight program, and the company is quietly rolling out a takeout service.

It’s clear that people like having fresh food delivered to their door, but there does appear to be somewhat of a food delivery bubble forming. Yet as veteran entrepreneur Matt Mireles outlines in this post, the opportunity is massive because of simple reasons: People eat three times a day, and food is something they’re willing to pay for. But which of these new delivery services survive remains to be seen.