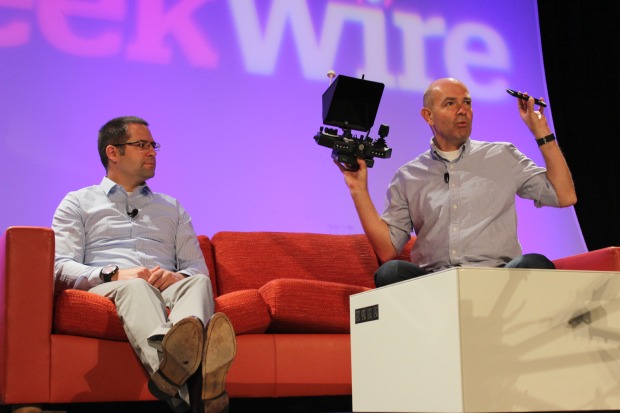 As drones become more commonplace, and are adopted by anyone from real estate agents to neighborhood enthusiasts, society is having to grapple with the rules of the air.

“It will be our job to keep the jackasses from doing stupid stuff,” said Chris Anderson, the CEO of 3D Robotics. “We can’t stop them, but we can let them know what the rules are.”

Anderson and National Geographic contributor Chad Copeland, a pioneer in the use of drones, discussed the tense intersection of drones and privacy at the GeekWire Summit this morning.

To be sure, consumer adoption of drones is just beginning, and the etiquette of operating them is far from being worked out.

For instance, a New Jersey man recently took justice into his own hands, peppering a robotic drone device over his home with blasts from a shotgun. Compare that to an enterprising drone operator in Seattle earlier this week who took his device to the sky to capture some amazing footage of a building fire in Seattle’s Fremont neighborhood.

Anderson said it is part of his company’s responsibility to teach users what is acceptable.

His company is targeting the commercial market, which he estimates to be a more than $20 billion business to exceed both military and personal spending. For example, he said since drones are not allowed in National Parks, his app will have a setting in the next beta that won’t allow you to operate in no-fly zones based on geo-location.

“As an industry we can nudge users into responsible play,” Anderson said.

In Copeland’s experience, he thinks people should reserve judgment. In one instance, he believes his carbon fiber drone, the size of a small coffee table, is less intrusive than the alternative.

“I was flying over a first wonder of the world,” he said, adding that a man-powered aircraft would have been much more intrusive, not to mention dangerous if it ever crashed. “If this goes down,” he said pointing to his drone, “no one is hurt.”

Plus, the environmental impact of a battery operated device has a much smaller footprint than a gas-powered plane. “When people see the positive use cases, they will realize these aren’t horrible things,” he said.

Anderson said it will be a slow road to acceptance.

Both Amazon and Google are tinkering with using drones to delivery products to consumers, but Anderson suggests the technology won’t leap forwards, but take baby steps in areas he called “drone zones.”

First, drones will make deliveries on private property from one warehouse to another. Next, you can imagine a drone delivering a pharmaceutical to a remote island.