Over the past two days, Apple’s stock price has fallen to just above $500 a share, down from where it sat above $550 before its earnings release on Monday. Here’s why, according to a new chart from Statista: 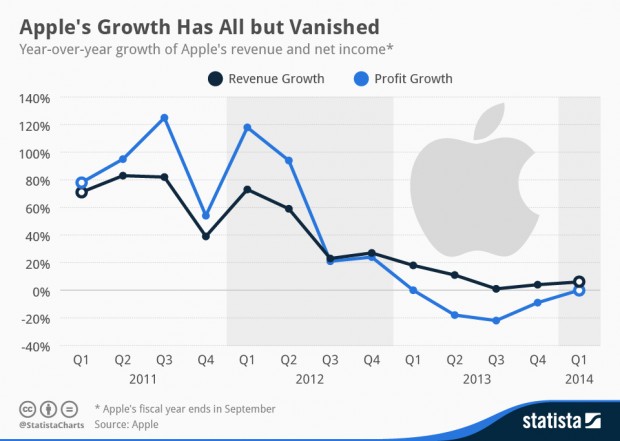 The Cupertino-based maker of iPhones, iPads and Macs has seen declining revenue and profit growth over the past few years, which is leading to concerns on Wall Street. I imagine that Barclay’s analyst Ben Reitzes was looking at a chart similar to this one when he asked Apple CEO Tim Cook if Apple was “still a growth company” on Monday’s analyst conference call.

Ouch. That’s a rough thing to say, but it points to a very real concern on Wall Street: companies that aren’t growing are worrisome, and Apple has had quarter after quarter of very modest growth. The midpoint of the guidance Apple offered for next quarter puts its revenue slightly down year-over-year, though CFO Peter Oppenheimer said some of that was due to changes in how Apple calculates its revenue and profits.

Of course, the chart doesn’t tell Apple’s whole story. The company’s quarterly revenue of $57.6 billion was more than twice what Microsoft reported, and should blow Amazon and Google out of the water, according to analyst projections from Thomson Reuters. Apple has grown so much over the past few years that it’s having a hard time coming up with more double-digit growth.

At this point, folks are worried that Apple doesn’t have much or any gas left in its tank when it comes to creating innovative products on the order of the iPhone or iPad. While Tim Cook has said that there are going to be some new products coming this year, it seems like fewer and fewer people are willing to take that as an article of faith.