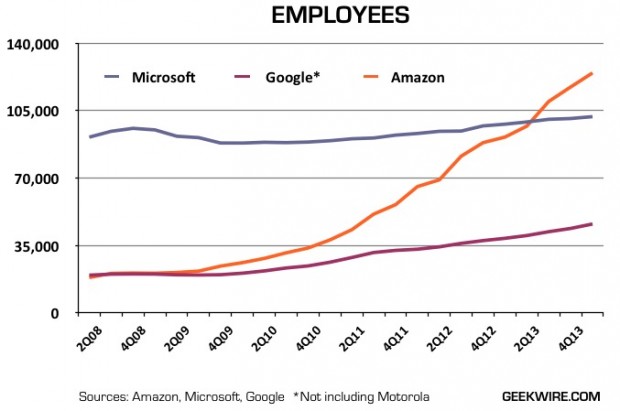 Amazon continued its trend of explosive headcount growth this quarter, adding 7,300 new employees to its workforce, which now totals 124,600 full- and part-time workers. That’s a stark contrast to some of its tech industry counterparts, including Google and Microsoft, which both saw significantly smaller headcount gains in the quarter. Microsoft added 982 employees in the quarter, while Google added more than 2,300 positions.

It seems likely that Amazon’s employee growth will continue along the same path. Demand for its products continues to grow, and the company is reportedly looking into starting its own “Last Mile” shipping service, which would certainly require many new employees to pull off.

That said, not all of Amazon’s employees are happy with the company’s labor practices. Workers at Amazon warehouses in Germany represented by the Verdi trade union went on strike earlier this month in protest over a pay dispute. The group had previously sent a delegation to protest outside Amazon’s headquarters in Seattle.

Amazon beat Wall Street expectations today, reporting $19.74 billion in revenue during the first quarter of 2014, up nearly 23 percent from almost $16.1 billion in the year-ago quarter.