Raising room prices when demand goes up is not a new concept in the hospitality industry. But for everyday people renting out their rooms on Airbnb, knowing how to implement a dynamic pricing model isn’t so easy.

The company originally started out as “Beyond Stays,” a full-service property management company for Airbnb hosts. But the employees soon realized that one of its innovations — a dynamic pricing tool — was increasing room rental revenue by as much as 40 percent. 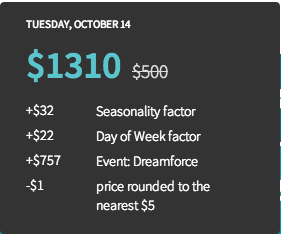 “Our pricing model turned out to be so effective that we ‘productized’ the service with the goal of making it available to all Airbnb hosts,” CEO and co-founder Andrew Kitchell told GeekWire.

Beyond Pricing’s pricing algorithm is a three-step process. The company first calculates how your listing has historically performed; then, it evaluates similar listings; finally, it looks at hotel prices, flight data, nearby events, and conferences to determine local demand for each night.

For example, in Seattle, Beyond Pricing is already calculating big spikes in rental prices during Bumbershoot weekend.

“Beyond’s goal is to help every Airbnb host price as intelligently as a hotel,” said Kitchell, a Seattle native.

Beyond Pricing has offered its service to a small group of Airbnb users in San Francisco for the past couple of months, and there are already seven percent of Airbnb hosts in the city using its pricing service.

The company expanded to Seattle because it has one of the highest occupancy rates on Airbnb in the country. In fact, Kitchell notes that Airbnb has an occupancy rate of around 90 percent for August in Seattle, while hotels are at around 95 percent for the month.

“This similarity in occupancy shows how strongly Airbnb is competing with hotels and how much demand there is for room rentals in Seattle,” he said.

Beyond Pricing has raised a seed round from a small group of angels and employs eight.