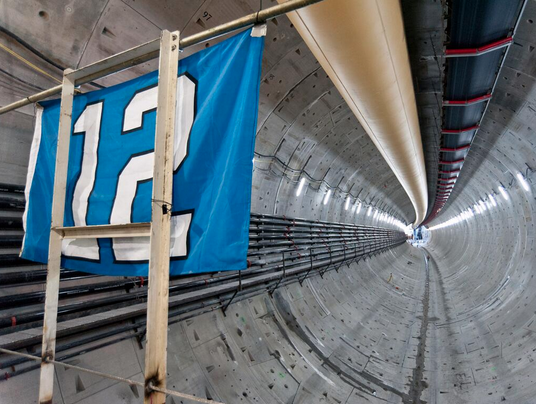 It’s been two months since the world’s largest tunnel boring machine stopped drilling underneath Seattle, but now Washington’s Department of Transportation has a better idea of what’s keeping Bertha from moving forward.

Last month, the state blamed a steel pipe for the stoppage — but that’s apparently no longer the reason for Bertha’s two-month delay.

The new problems, outlined today by WSDOT and its contractor (Seattle Tunnel Partners), include a clogged cutterhead and overheating which damaged a seal system.

After the unclogging job was done, workers moved Bertha forward two feet and then found that overheating was causing damage to a seal system that protects the machine’s main bearing. Here’s how the state describes the issue:

The main bearing is what allows the cutterhead to spin. It is similar to the bearing on the axle of a car, which is protected by a seal that keeps lubrication in and road grime out. The tunneling machine’s main bearing is protected by seals that function the same way – they keep the bearing lubrication in and the tunnel muck out. Investigations have shown that portions of the seal system have been damaged and need to be repaired or replaced. STP and its tunneling experts are working with the machine’s manufacturer to determine the best fix for this issue. They are currently assessing the extent of the damage and the best path forward.

The state, which has hired independent experts and tunneling inspectors to provide analysis and review, will wait for Seattle Tunnel Partners to determine repair options and move the project forward.

At 57.5 feet in diameter and more than 300 feet long, Bertha is named after former Seattle Mayor Bertha Knight Landes, the first female mayor of a major U.S. city. The $80 million machine began digging from Sodo in July and will eventually make its way to South Lake Union. A four-lane, 1.7-mile underground tunnel is scheduled to open by 2016, when the current above-ground Alaskan Way Viaduct will be demolished.

As it stands now, Bertha is only one-tenth of the way toward completion.