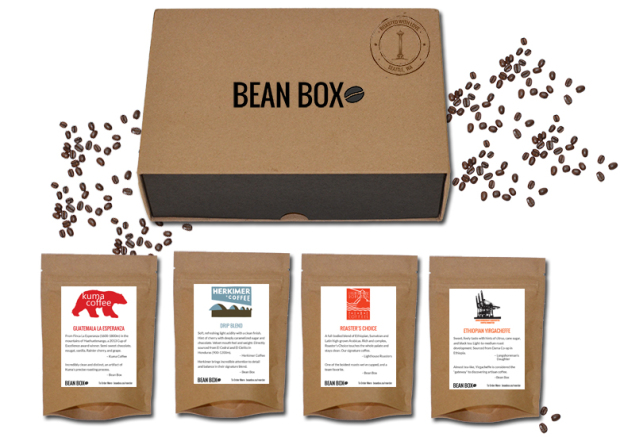 Sending a monthly collection of fresh coffee roasts to people around the country probably wasn’t in Lucky Oyster’s business plan. But that’s exactly what the Seattle startup is launching today with Bean Box.

The new offering is somewhat like a Birchbox for coffee, with customers receiving four 1.7-ounce bags of roasts from premium, independent roasters in Seattle once a month for $20. The coffee makers, from Kuma to Herkimer to Lighthouse, ship the beans within 24 hours of roasting to ensure peak freshness, while Bean Box members can order full-size bags of the coffee they end up liking best.

“We believe that everyone should have access to freshly roasted coffee from world-renowned roasters, and that you don’t have to be a coffee techie to appreciate the experience,” said Bean Box co-founder Matthew Berk.

Berk, a former Marchex exec and Open List CTO, told us about his plans for Lucky Oyster almost exactly two years ago. The idea was to index the world’s information and help consumers discover new experiences with a socially relevant search engine based on recommendation exchange.

Along the way, though, Berk found that users were extremely engaged with coffee recommendations — things like best local cafes, high end roasters, specific brands, and best equipment. On top of that, while interviewing customers in Seattle coffee shops, Berk and his co-founder Ryan Fritzky would often walk out with bags of fresh roasts to send to family across the country.

“With all the caffeine in the air, as is common in engineering culture and startups, we started to look into why coffee culture, even in the caffeine capital of the U.S., is still largely about proximity and convenience rather than the passion people express for it,” Berk explained. “We quickly found that there’s a great opportunity to help people discover great new experiences in their morning cup.”

Thus, the idea for Bean Box was born. Yet the goal for Berk and Fritzky is to not only deliver Seattle’s finest coffee to people around the country, but to build out what they call a coffee discovery platform.

That’s where the crossover with Lucky Oyster comes in. Berk said that the original idea for Lucky Oyster — apps that help people find the best experiences around them — will continue to be developed, while the startup also has a patent on social recommendation exchange that may come in handy with Bean Box.

“As we focus more and more on the Bean Box opportunity, we will be selective about how best to deploy those assets,” Berk said.

Berk added that Bean Box differentiates itself from others mainly with the company’s proximity to so many premium roasters that are apart of what he calls “an incredibly tight-knit community” who want to expand their base beyond Seattle and the Pacific Northwest.

“It means we can have coffee en route to customers within one day of roasting,” Berk said. “There’s no double shipping from roaster to warehouse to customer, and unlike other competitors, we believe two-week old beans aren’t in fact fresh.”

The company plans to target a growing market of coffee drinkers who are developing larger palates, but may not want to purchase an entire bag of beans that they haven’t tried.

“There’s no reason to buy large bags of beans just to try an Ethiopian coffee, nor should consumers have to travel to Seattle or bounce from cafe to cafe to discover what they love,” Berk noted.

In the past month, Berk and Fritzky — who are running this operation as a two-man team for now — have shipped Bean Boxes to 34 states during a beta test.

So far, Lucky Oyster has raised $1.25 million from investors like Seattle super angel Rudy Gadre and Marchex co-founder John Kesiter. Check out a review of the first Bean Box below: