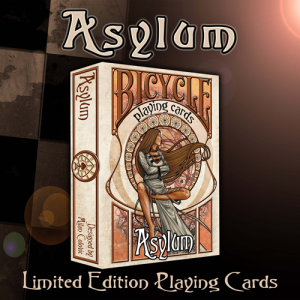 If you raise money via Kickstarter and don’t deliver products you promised backers, the government will come after you.

Back in October 2012, Nash raised $25,146 from 810 backers — including at least 31 from Washington — for a playing card game called Asylum designed by a Serbian artist and managed by Nash. The campaign exceeded its funding goal of $15,000, meaning Nash was legally responsible for sending every backer the products they paid for.

But as the estimated delivery date of December 2012 passed, customers never received their Asylum product. In the months following, angry backers voiced their frustration on the ongoing Kickstarter page comment thread.

“Almost a year and no updates,” one backer wrote. “Ed Nash is in hiding.”

“This IS pathetic,” another said. “Kickstarter dont care at all same as Ed he dont care he has his money.”

According to the lawsuit, both Nash and Altius have not communicated with the backers since July 2013. The Attorney General’s office is seeking restitution for consumers, as much as $2,000 per violation of the Consumer Protection Act in civil penalties, and money to cover the state’s costs and attorneys’ fees.

“Consumers need to be aware that crowdfunding is not without risk,” Ferguson said in a statement. “This lawsuit sends a clear message to people seeking the public’s money: Washington state will not tolerate crowdfunding theft. The Attorney General’s Office will hold those accountable who don’t play by the rules.”

“If people mislead and defraud people, they can expect the government to take action,” Wallin said.

Kickstarter notes that the company “does not guarantee projects or investigate a creator’s ability to complete their project.” However, its Terms of Use page does note the legal obligation of people to deliver their product if funded. From the FAQ:

Is a creator legally obligated to fulfill the promises of their project?

Yes. Kickstarter’s Terms of Use require creators to fulfill all rewards of their project or refund any backer whose reward they do not or cannot fulfill. (This is what creators see before they launch.) This information can serve as a basis for legal recourse if a creator doesn’t fulfill their promises. We hope that backers will consider using this provision only in cases where they feel that a creator has not made a good faith effort to complete the project and fulfill.

We’ve reached out to Kickstarter for further comments.

The Altius Management website is blank, though some subpages are still online. The company’s LinkedIn page describes it as a “full-service entertainment and artist management firm.” Nash, meanwhile, is still listed as the president of the company on his LinkedIn.

It doesn’t appear that Nash is “hiding,” as one Kickstarter backer noted. His Facebook and Instagram accounts have been active.

Nash describes himself as an “experienced veteran of the music industry,” on his About.Me page.

“Now in his early 30’s, Ed is clearly outperforming his peers — as President of Altius Management, Ed represents a select roster of clients, now only in music, but in film, television, and comedy,” the page notes.

Check out the full lawsuit here:

Update, 5/2: Here’s the statement Kickstarter shared with us:

“Tens of thousands of incredible projects have been brought to life through Kickstarter. We want every backer to have an amazing experience, and we’re frustrated when they don’t. We hope this process brings resolution and clarity to the backers of this project.”

Update, 5/4: We reached out to the Washington State Attorney General’s office, and here’s the statement they gave us:

“This is a new frontier. We hope this sends a message to other potential project creators to take their responsibilities seriously.  We look forward to bringing more cases, if necessary, to protect consumers.”